The Long Way to a Small Angry Planet 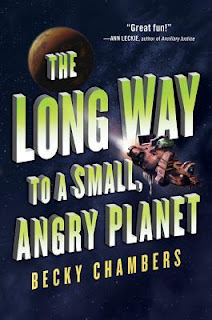 Friends, I've just read the most wonderful book! I kept hearing that it was good, and I even checked it out of the library once before and returned it without reading it. But this time I took it on vacation with me and we had the best time together!

As the title suggests, this story is about a journey to a planet. Ashby is captain of the Wayfarer and its multispecies crew. He has finally hired a clerk, which he was totally overdue for, and which has now given his team a more professional air and helped secure a very exciting new job. They are to create a tunnel to a planet called Hedra Ka, which has long been unfriendly to everyone but has suddenly joined the Galactic Commons. (Nope, not suspicious at all. Nothing to be concerned about.)

The new clerk aboard the Wayfarer is Rosemary Harper, who is trying to flee some secrets of her own. She's more than happy to take on her new job with her interesting crewmates. Like Rosemary, some of them are human: Ashby, Kizzy, Corbin, and Jenks. But their doctor/chef who they call Dr. Chef is a Grum (his real name is unpronounceable by humans) and he's described as a cross between an otter and a gecko, and he walks like a caterpillar on a few sets of hand-feet. Sissix is the pilot and she's an Aandrisk, a reptilian being with feathers on her head and claws. Her people are very physically affectionate beings and have a lot of casual sex, which is not considered especially private. Finally, and perhaps most interestingly, is Ohan. They are a Sianat Pair, which are all infected with a virus called the Whisperer that gives them a much deeper understanding of space and therefore great value as navigators. They think of themselves and their virus as a pair, so they are always referred to as "we" and "they" rather than a singular pronoun.

What makes or breaks my experience reading science fiction are the characters. Sometimes they're two-dimensional because the story is all about the plot and the world-building, and those books just don't do it for me at all. These characters are all fully realized and genuine and I had a fun time with them on their long journey. This wasn't at the price of other factors though; in fact, the world-building was great, and totally borne out of the characters, each of whom had a story that told us more about the universe in which it takes place.

But I think what I liked best about this novel was the way all these characters from very different cultures communicated and worked together. Most of them spoke a couple of languages, and they learned about the histories of other species and, at the very least, their customs and conventions. They were all super aware that their own way was not everyone's way. And when they didn't really understand another species' ways, they still respected them. They still went along with it and didn't try to convince them their way was silly or made no sense. It was pretty great. There's a point in the story when Corbin is talking to Ohan about how Jenks is in love with Lovey, their AI on the ship, who doesn't even have a body. He says "I don't pretend to understand. Frankly, I find the whole notion absurd...But it doesn't matter what I think. Jenks thinks something different, and his pain is very real right now. Me knowing how stupid this whole thing is doesn't make him hurt any less." And Corbin is an asshole. But even he has respect for others' differences.

The cultures were so inventive and well-thought out too. Aandrisks will give one of their feathers to someone who has touched their life, and keep the ones given to them as a reminder of everyone they've had an impact on, which I thought was a neat practice. More interestingly, they don't see children as fully-fledged people until they get their feathers. The death of hatchlings is fairly common and to be expected. Sissix doesn't understand why an infant would be considered of more value than an adult, saying "the idea that a loss of potential was somehow worse than a loss of achievement and knowledge was something she had never been able to wrap her brain around." Me too, Sissix. Me too. I've never understood why we consider babies and children to be more important and valuable than adults (although I still think they're people, and don't think they are necessarily of lesser value.) And the Sianat Pairs! To think that a virus is absolutely necessary to your identity, even though it is greatly reducing your lifespan. So many philosophical questions come up in relation to Ohan and their species and their relationship with this virus. And I haven't even mentioned the Aeluons, who don't speak or hear as we do, but communicate through colorful displays on their skin.

Look, I could go on at length here, and I guess I already have. There's just so much interesting stuff in this world, and it's populated with people I really want to get to know more. It was super creative and a lot of fun to read. Fortunately, there are two more books in this series (so far? I don't know if it is complete) so I may pick up the next one. I read the description and it's pretty intriguing, though I haven't heard if it's as good as this one. But I'm willing to find out.
Posted by 3goodrats at 5:12 PM