Can't Nothing Bring Me Down

Can't Nothing Bring Me Down: Chasing Myself in the Race Against Time by Ida Keeling (2018), narrated by Lisa Renee Pitts 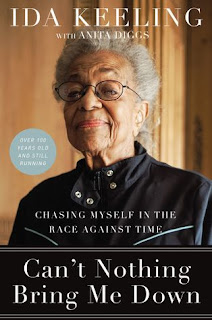 When Ida Keeling was in her early 60s, both of her sons were murdered within a couple of years of each other. She plunged into depression. One day one of her daughters came to her and explained that she was taking Ida to run a 5k. She didn't know what else to do, but she couldn't let her mother continue to just sit at home in despair. Ida became a successful athlete and still runs today at the age of 103.

As it turns out, the book didn't actually talk a ton about the running. I expected her to really focus on that part of her life and how it helped her deal with grief, but that was really just a couple of chapters at the end. Mostly, though, it was just the story of her long and fascinating life. (Which is just as well since running is kind of boring.)

She was born in New York in 1915, and I really liked hearing about what it was like for a black woman growing up at that time. Interestingly, she had her two sons with a man she wasn't married to, which is something we seem to think was a huge scandal back then, but not the way she tells it. It turns out the reason this guy was dragging his feet on getting married is because he already was. Ouch. She talks about all the jobs she had in factories and what it was like to try and get by as a single mom. She lived through the depression, World War II, and civil rights. She went to hear black leaders like Malcolm X speak often, and was even present when Martin Luther King, Jr. gave his famous "I have a dream" speech.

Ida Keeling has lived a long time, experienced many things, and learned a lot from her experiences and observations. In many ways, she's pretty old school: she's a religious woman and thinks you should always listen to your parents, who apparently can't possibly ever be wrong. But she's far from stupid. She talks at one point about how men's heads are filled with "crap" that leads to the "good old boys" way of thinking. She also states the importance of not letting people aggravate you. She says, "Like President Barack Obama, I absolutely refuse to tolerate drama." She loves Obama.

This book isn't going to win any literary awards. Keeling is an athlete, not a writer. It wasn't terribly written, but she often used vague phrases like "or something" and "things like that" and listed the specific addresses of all the places she lived and worked. It was just a bit unpolished. Likewise, the narration wasn't of the quality that I'm used to. Again, not terrible, and none of this was enough to turn me off.

In the end, I came away with a great deal of respect for this lady who has learned and experienced a lot in her 103 years. She's smart and tough, has lived through a lot, and proves you're never too old to change your life.
Posted by 3goodrats at 4:30 PM