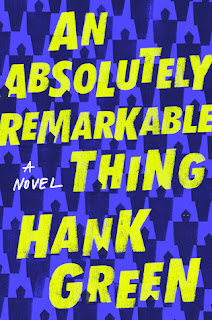 Late one evening, April May finds a weird art installation in the middle of New York. It looks like some sort of futuristic robot. She immediately calls her friend Andy and gets him out of bed so he can come make a video with her and the statue, which they call Carl. It goes viral. Turns out there are many Carls, in cities all over the world, and they all appeared mysteriously at the exact same time. No surveillance footage caught how they arrived - where there were cameras, they cut out for a bit. In the static, though, a song could be detected: "Don't Stop Me Now" by Queen. As one mystery leads to another, April and Andy become famous for getting the scoop and are propelled to stardom.

Of course it comes with a price. April is 23 and lives with a roommate, Maya, who is also kind of her girlfriend. April is a terrible relationship partner and the distraction of fame only makes it worse. She becomes obsessed with social media and creating her brand. Soon she has an agent and an assistant, as well as the help of a scientist named Miranda who had emailed her out of the blue with some interesting insights regarding New York Carl, and now she's running around with all of these people and ignoring Maya at home.

Although April makes terrible life decisions and often doesn't treat people well, she's not a bad person. She recognizes her mistakes and owns them. There are lessons here about being addicted to fame and how that can ruin your life. But through it all, her message is for everyone to come together. That's what she thinks the Carls want. But her message isn't the only one out there. A guy named Peter Petrawicki has a very different message, and that is one of caution. He thinks April is being reckless by trying to figure out what the Carls want and giving it to them without question. His followers are known as the Defenders and they are pretty extremely opposed to April. They are extreme in general - angry, hateful, and some of them violent.

There are several compelling themes in this story. One is about fame, particularly internet fame, and how it changes you. It's also about polarization and how we let fear of the unknown divide us and pit us against each other. There's a lot to think about and it would be a great book for discussion. It's so relevant to life today.

I found this book fast-paced and conversational, and although bad things happen it all felt pretty light and fun and uplifting. Mostly. This is Hank Green's debut, and unlike his brother John Green's books, this is considered an adult book. However, the writing style and content would totally appeal to teens. I found it a breeze to get through and would totally read another book by Hank Green if he writes one.
Posted by 3goodrats at 3:10 PM