Mercies in Disguise: A Story of Hope, a Family's Genetic Destiny, and the Science That Rescued Them by Gina Kolata (2017) 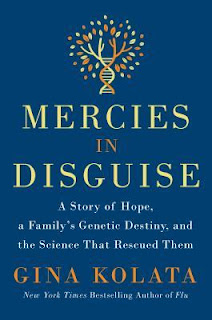 Well, I was not expecting this book to be such a page-turner. I heard about it pretty recently - I don't remember where, but the premise sounded interesting. It's about a family with a genetic disease and a young woman in the family who decides to get a test to learn what her fate will be. It's also about the research behind this whole group of diseases of a previously-undiscovered type, known as prion diseases. I thought it would be interesting, but I was surprised to find that I couldn't put it down.

It wasn't very long, and the story moved between the scientists trying to understand what caused a condition called kuru that affected a particular village in New Guinea, and the Baxley family who was dealing with another disease on a very personal level. It turns out that kuru is a prion disease, as is Creutzfeldt Jakob Disease (CJD), as is Gerstmann-Sträussler-Scheinker disease (GSS), which is what the Baxley family suffered from. It was a whole new type of disease caused by misfolded proteins (I think?) and this was a pretty major scientific discovery.

For the Baxley family, it was a very scary family inheritance. Tim Baxley's father Bill developed a degenerative condition that was never adequately diagnosed and which killed him within several years of first showing symptoms. At the funeral a woman off-handedly remarked to Tim that she remembered his grandfather stumbling through the factory where he worked. It was only then that Tim realized the disease might be hereditary and this began the family's earnest search for answers. Then it began to affect Tim's generation of the family. Amanda is of the next generation and she is the one who decides to get genetic testing.

Many members of the Baxley family are pretty religious and there are some interesting discussions where their faith intersects with science. This especially comes to the fore when two sisters feel the opposite about being genetically tested to find out if they'd pass it on to their kids. Amanda is determined not to pass such a horrible disease on to her future kids, but her sister Holly decides to let nature take it's course (or God, I guess. She is probably the most devout person in the family.) After reading about both of these sisters, decisions to get tested or not, and how those decisions affect their lives, it's honestly hard to fault either of them for their approach. The fact is, there are many things that can kill us (or our kids) and at some point you have to just enjoy your life and do the best you can without feeling a pressure to make the right decisions all the time. Sometimes it's not a matter of right or wrong.

I was just so absorbed by this story. Reading about all the different members of this family and the different ways in which they dealt with this disease and their fear of getting it offered fascinating insights into human nature. This is not a case where testing positive for a gene means you have a chance of getting a disease - it means you will get it. Being tested for GSS means knowing your future, knowing that you will die a slow, painful death when you are likely only in your forties. How do you decide whether to find out? It's heartbreaking.

As I mentioned at the beginning, I don't recall where I heard about this. But the topic really caught my eye, as did the author. She wrote a book called Flu which is all about the 1918 flu epidemic which I read many years ago. I don't remember anything about it, but I do remember liking it a lot. This was exactly the kind of nonfiction I like - not too long, with a compelling story, and interesting people. If you like narrative nonfiction, especially about medical or scientific topics, I'd suggest trying this one.
Posted by 3goodrats at 8:37 PM