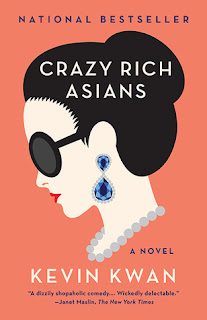 Since this has been made into a popular movie, you probably know the basics. Nicholas Young is bringing his girlfriend Rachel Chu to Singapore for the summer because his best friend is getting married. But he hasn't told Rachel much about his family, who are extraordinarily wealthy and inhabit a social sphere that Rachel probably doesn't realize exists. He thinks there will be no problem with this. It's as though he's never actually met his own family or friends before.

His cousin Astrid - one of the two characters I like in this book (the other being Rachel) - tries to warn him, but Nick is pretty stupid and won't listen to her. So of course Rachel is caught completely by surprise, his family won't accept her, some of his acquaintances decide to try and sabotage their relationship, and basically it's like a terrible reality show with a tacked-on happy-ish ending that doesn't actually make sense.

These people are mostly all horrible and nobody actually learns anything during the course of the story. Nobody grows as a person or learns anything new. Perhaps Nick realizes he should have been more forthcoming with Rachel, but that's it. (Minor rant: he also "learns" that if a woman breaks up with you, you should continue to pursue her until you get her back, because obviously women do not know what they actually want and no probably doesn't mean no.) Everyone is completely self-centered, vapid, and uncaring about anyone not in their social sphere. It's hard for me to like anything about that.

The writing was a bit forced in parts, too. For one thing, grown women in this story are constantly giggling at odd times that don't make sense. Some of the dialogue was also a big unrealistic, such as when Rachel discovers a nasty prank in her room, a kind person asks if she's ok, and she says, "No, no, I'll be fine. I'm just shaking involuntarily." Hello, let me narrate my signs of distress right now.

Here's what I did like: I liked Rachel and Astrid and their stories. Astrid was having marital difficulties (spoiler: they were fabricated, which was a totally cheap plot point), and was the only wealthy character who was anything other than a collection of eccentricities slapped together on the page. Rachel, as a "regular person" was the only other one I could really relate to. She has this great boyfriend but he hasn't shared much about his life, keeping some pretty key information from her and then just setting her down into the middle of it all and leaving her to deal with it. I felt bad for her. Nick was ok, there just wasn't much to him and, as I said, he's kind of stupid.

I also liked the settings, which were mostly in parts of Singapore and Hong Kong. As you may know if you've been reading this blog for a while, I visited Hong Kong in 2012 and I really like reading books that are set there. That's probably one of the reasons I ended up reading this, and I did enjoy reading about parts of Hong Kong that I recognized.

I also like the cover design. Simple, yet eye-catching.

I don't even know what made me pick this book up, to be honest. I don't enjoy wealthy entitled people being horrible, but I guess I hoped there would be more to it. Especially given that it's over 500 pages long. Surely there would be some real substance here. There's not.

I almost put the book down several times in favor of something else (I had the new Liane Moriarty on deck!) but wanted to find out what would become of Astrid's marriage. It wasn't really worth it. And once again, I always find much more to say about a book I don't really like than one I do. I'm actually rather curious how the movie compares and I may still see it, since most of this is about the settings and clothing and I think it might be visually entertaining. Have you seen it? What did you think?
Posted by 3goodrats at 5:32 PM

I haven't yet seen the movie, but did read the book and I'm with you. I just couldn't get past the idea that apparently in two years of serious dating, that they'd never had a single real discussion about his family. I could understand not front-loading that information, but in an actual meaningful relationship? And then she just like brushes off all the shitty things that she's subjected to once they're in Singapore and doesn't talk to him about what's going on and how she feels about it? And we're supposed to get invested in/root for this couple to make it?

I totally agree. And what I *really* couldn't get past was when she tried to break up with him and talked about how his family would never accept her, but then they got together again and never dealt with those issues. Did she just decide she doesn't actually care about those things? It was so frustrating.

I haven't read the book and haven't really had a desire to, but I liked the movie. There were plenty of unlikely plot points, but all the glamour was fun to see, and the performances were great. Even the unlikable characters were mostly enjoyable to watch. But it didn't leave me longing to read the book, as movies sometimes do. Most of what I liked was specific to the medium and didn't seem like it would necessarily work so well on the page.

I suspect it's a much better movie than book!