Last book review of the year! 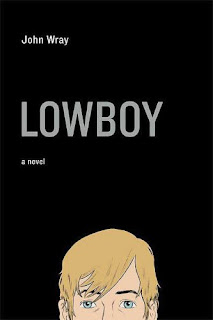 Lowboy is Will Heller, a mentally ill teenager who is off his meds and wandering through the NY subway system in a conquest to stop global warming by finally having sex. His mother, an Austrian immigrant who he calls Violet, is working with police officer Ali Lateef to track him down before he causes harm. Though he is not especially violent, he once pushed his best friend Emily on the subway tracks in Union Station.

The chapters alternate between Will’s story and Ali’s. Though Will is schizophrenic and many of his thoughts are completely illogical, it was still easy enough to follow along in the story without confusion. But the scattered thoughts were disorienting enough to create a small taste of what Will may have been feeling. Wray gets inside Will’s head enough to make us understand why Will is doing what he’s doing and one can only have sympathy for this misguided, doomed character.

I found this in the Young Adult section of my library, but the writing is more like an adult book, and indeed many libraries have it in their adult collections. If you like well-written novels about teens in trouble, this may fit the bill. As an added point of interest, much of the book was written where it takes place – on the subway!
Posted by 3goodrats at 9:46 AM