A Wild Sheep Chase : a review 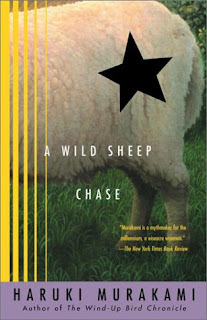 In this early Murakami novel, the unnamed protagonist is a youngish divorced man who is called upon by a stranger to solve a mystery. The main character had published a photo of a sheep with unique markings and the mysterious stranger demands that the exact sheep be found. Our hero and his girlfriend embark on a strange adventure to Hokkaido and then to a remote village to learn more about the sheep they are seeking.

The novel is somewhat fantastical, but mostly I found it frustrating and confusing. Had I not been reading it for a book group, I would have stopped after 50 pages. In the first 100 pages nothing whatsoever happened. There were vague references to people and events without context so I promptly forgot them. Near the middle when our hero and his girlfriend start on their quest it got interesting and I started to enjoy it. But then the ending left me bewildered.

The writing is not formal exactly, but not conversational either. There is no warmth or humor anywhere in its pages. None of the characters are named - except the cat who is named about halfway through the book (Kipper, if you are interested) - though a couple of them have nicknames. I can only speculate that this to retain the cold impersonal feeling of the story. There’s also a great deal of abstraction and symbolism, which is pretty much always lost on me.

The only other Murakami I’ve read was non-fiction, so I don’t know how this compares to his other fiction. I’ve heard that some of his books, especially The Wind-Up Bird Chronicle, are quite good. But after slogging through this unpleasant mess, I probably won’t ever find out for myself.
Posted by 3goodrats at 2:37 PM