Strangers at the Feast : a review

Strangers at the Feast by Jennifer Vanderbes (2010) 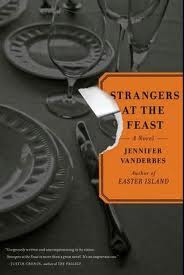 A family comes together on Thanksgiving and the day goes from bad to worse, beginning with a faulty oven and ending in bloodshed. The hostess is Ginny, an academic who has just adopted a 7-year-old mute Indian girl and bought her very first home. Her brother Douglas arrives with his wife Denise and their kids, and the family is rounded out by Douglas and Ginny’s parents, Eleanor and Gavin, a housewife and a Vietnam veteran.

The day begins at Ginny’s new house. Her recent settling-down is cause for surprise and doubt in her family. When it becomes clear that her oven isn’t working – and that much in her house isn’t up to code – the family decides to pack up and drive to Douglas and Denise’s home which not only has a working oven, but a tv so they can watch the football game. Though the home is large and extravagant, Douglas and Denise are struggling financially and it’s putting a strain on their marriage as well.

Meanwhile, a couple of young men are planning a break-in. Peppered throughout the book are chapters focusing on Kiko and his friend Spider, two young men from the projects. Kiko feels responsibility towards his grandmother and wants to help her leave their neighborhood. He doesn’t want to become involved with crime like so many of his peers, and today is a one-off for him. But it’s something he feels he needs to do, for reasos that become apparent as more background is slowly revealed.

Switching perspective between six different characters, the day is broken up with many flashbacks to flesh out the characters and give more substance to the story. Each chapter was named for the character whose perspective we were seeing, which eliminated the usual confusion of that storytelling technique. The present day story was strong enough that the flashbacks didn’t leave me feeling untethered as so frequently happens.

The characters were fairly well developed, especially considering how many of them there were, but I didn’t really identify with – or feel especially drawn to – any of them. Ginny’s story was probably the most interesting, though I also enjoyed Eleanor and Gavin’s back story of their early relationship.

Vanderbes used two techniques that I usually dislike, and this double whammy of heavy flashbacks and switching perspective could have gone badly, but she managed to pull it together pretty tightly. The novel was well orchestrated, the pieces of the story coming together smoothly for the final, climactic scenes. I liked the book a lot, but if the characters had resonated a bit more, I could have loved it. It sounds like Vanderbes’ first novel, Easter Island, is a bit more personal and character-focused, so I’m adding it to my list now.
Posted by 3goodrats at 11:20 AM