The Civil War : a review 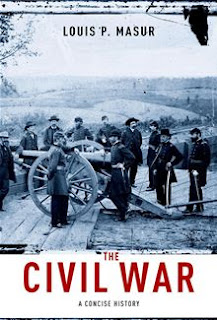 One of the challenges of reading non-fiction is that everything seems so long-winded. I have neither the patience nor the attention span for the dense or scholarly, so I was happy to hear about the 124-page Civil War history that was just released in February. Bear with me as I switch gears from the superfun times of young adult novels to a serious book about our nation's history.

Masur won me over in the Introduction in which he managed to quote both Cormac McCarthy and Tolstoy, and then went on to present a straightforward and readable narrative of a fascinating and extraordinarily difficult time. You think politics is polarizing now? At least states aren’t seceding and we’re not literally at war with ourselves (nor are we likely to be.)

Though brief, the book touches on the complex issues of the war - states’ rights, slavery, economics – as well as describing the horrors of battle and sharing a few photos. The Civil War was the first war to be photographed - what a shock that must have been for those following along at home!

Having little education on the Civil War, I learned a lot and was surprised by some things that just hadn’t occurred to me. After the Emancipation Proclamation, for instance, there was a great deal of resistance. Though many hailed the abolition of slavery as the right thing to do, many others thought slavery should be preserved at all costs. I mean, obviously, or there wouldn't have been a war. But it's strange to think about how long it took people to get on board with abolition.

This book would be a great place to start in educating oneself about this important period in history, and I would be happy to recommend it highly, except for one small thing. And by small, I mean tiny. The font! It’s almost microscopic! I’m mystified as to why Oxford University Press would choose to do this. Without the notes and bibliography, the book is only 94 pages long – with a normal font it would still be a short enough book for the easily-deterred. The good news is that this is available as an ebook, so if you're willing to pay for it (or if your library has it), you can adjust the font size to suit you. Problem solved!
Posted by 3goodrats at 7:04 PM

I'm glad you enjoyed the book. I have a theory or two about the font size. Oxford UP probably made the font that small to keep the book under a certain number of pages. If it had been longer than 124 marketing as "concise" may have been less credible. Another theory: sometimes publishers decrease the size of a book so they can fit more copies in each box and reduce shipping costs. For example, Scribners cut the nutrition info for each recipe out of the 1997 edition of the Joy of Cooking (I think it was Joy of Cooking)to make the book shorter, and thus able to fit more copies in each box.

There may be something to that. I just noticed that the new Simon Winchester book - which is about 110 pages and from the same publisher - also has a pretty small font.