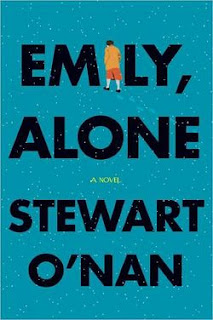 Stewart O’Nan’s latest novel, picking up seven years after Wish You Were Here, begins with my favorite opening line in quite a while:

“Tuesdays, Emily Maxwell put what precious little remained of her life in God’s and her sister-in-law Arlene’s shaky hands and they drove together to Edgewood for Eat ‘n Park’s two-for-one breakfast buffet.”

Emily is a widow whose grown children live far away and are busy with their own lives and children, and she spends a great deal of time looking forward to, and planning, their visits. In the meantime, her most frequent companion (aside from her old dog, Rufus) is Arlene, upon whom Emily has grown dependent after she gave up driving several years ago. But when Arlene passes out at the Eat ‘n Park one day and Emly has to drive her car to the hospital, she rethinks decision to put her car away for good.

Considerably shorter than it’s predecessor, this novel is more focused as it centers solely on Emily’s character. It’s still more slice-of-life than action-oriented, but the themes are more prominent than in Wish You Were Here. We see Emily growing more independent at a time of her life when we expect the opposite, and the result is a touchingly hopeful portrait of old age.

I loved everything about this book. The descriptions of her small daily life were exquisite, as one would expect from O’Nan. One of my favorite passages was a one-page chapter called “Kleenex” in which Emily notices that a box of Kleenex has gotten low and so she restributes all the boxes in her house according to which areas get the most use. (Which I will absolutely do when I am that age.) I also especially enjoyed Emily’s visit to an art exhibit, where she is awestruck by the Van Gogh painting “Almond Blossoms” (which struck me similarly when I saw it in Amsterdam last fall.) Even though it made no sense that Rufus was still alive when he was already old in last novel, I was glad that he was because Emily’s relationship to her pet added so much to the story.

Having read Wish You Were Here filled in a lot of background about Emily's history and family, but I think this novel can easily stand alone. If you are hesitating because you haven’t read the previous book, put it off no longer. Emily is so much like someone we all know that she will be immediately recognizable.
Posted by 3goodrats at 9:26 PM

I am excited to get my copy from the BPL this week. I think O'Nan has grown as a novelist since Wish You Were Here and I love Emily so much I am excited to see what he does with her in his matured hands.

I really think you'll enjoy it!