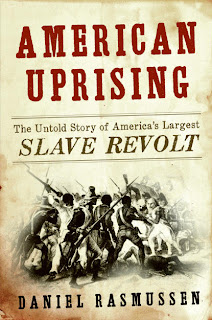 Quick: when was the largest slave rebellion in U.S. history? Think it was Nat Turner’s rebellion? Or do you simply have no idea? Then just like me, you have been sadly uninformed about a significant part of our nation’s history.

After reading this book about the Civil War, I went a bit farther back in time and read Daniel Rasmussen’s brand new, and blessedly short, book about the 1811 German Coast uprising. Yeah, I had never heard of it either. A small group of slaves from several plantations in the New Orleans area carefully planned their rebellion in secret and on the night of January 8th they led a huge group – maybe as many as 500 slaves - to revolt. Ultimately, they were quashed and cruelly punished, but the event had far-reaching consequences. For instance, one of the reasons the Americans won the Battle of New Orleans was because the city was so well fortified in response to the slave rebellion.

There was a lot packed into the 150 pages of this book. The first couple of chapters created some context for the events, including a brief description of the slave revolts in Haiti, probable inspiration for the German Coast uprising. After the detailed description of the revolt were a couple of chapters about the aftermath and how the uprising affected later events up through the Civil War. Rasmussen tied together a lot near the end, comparing the uprising to the later actions of militant civil rights activist Robert F. Williams and the Black Power movement. These later chapters were necessarily less detailed, and perhaps he was too ambitious in including all this information, but I appreciated it. Finally, he described the cover up of the uprising and how the events were downplayed by the government and consequently became somewhat lost in history.

I found this book very readable and surprisingly enjoyable. It’s not written like a history book – a litany of names, places, and dates - but has a pretty good narrative feel. For instance, when describing the initial events of the revolt Rasmussen writes:

“With the clouds darkening the cane fields and the rain blotting out the noise of their approach, the slaves hastened toward the back door of the Andry mansion.”

So much tension and excitement! Similarly, during a battle scene he writes:

“As the first soldiers on both sides fired their muskets, clouds of smoke would have quickly poured down on them, hiding everything but the flash of enemy guns.”

It’s these details that make the history in this book really come alive. He describes sights, smells, food, weather conditions and other details throughout the book, making it seem so much more real and immediate than the history I read in school. In fact, this book would be excellent for high school students who are bored of the usual list of facts and dates that run together into a meaningless jumble. Or, of course, anyone interested in learning more about American slavery.
Posted by 3goodrats at 9:37 AM

It sounds like a great book. I never actually knew that any part of Louisiana was ever called the German coast. As for slave knowledge of the Haitian rebellion, I wonder what kind of knowledge filtered down to slaves? And how accurate was it? I'm sure American plantations owners made very effort to suppress the news, but that would have been impossible.