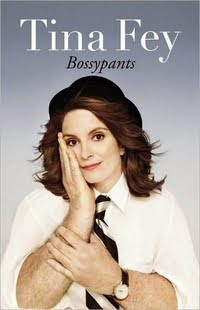 I've enjoyed the comedy stylings of Tina Fey since I watched her on SNLs Weekend Update with her delicious co-host Jimmy Fallon. She was smart, funny, and down to earth. Throughout her successes with SNL, 30 Rock, movies like Mean Girls and Baby Mama, Fey has remained a relatable everywoman, only increasing her appeal. This quality is nowhere more apparent than in her recently-published book, which I prefer to think is titled Manhands.

From her humble beginning as a “change of life” baby (omg, so am I – we are sisters!), Fey recounts her early life and career, as well as more recent experiences such as her return to SNL to play Sarah Palin. The memoir is chronological, but not linear; that is, events are presented in order but there is no continuous flow between chapters. Some chapters are about events or experiences, others more thematic in nature. There is a chapter of remembrances on being very skinny, and one on being a little bit fat, both ending with “we should leave people alone about their weight.” She also shares a very funny story about her honeymoon, during which their cruise ship caught on fire. (Which I realize doesn’t sound funny, but it is.) An odd but fascinating chapter called “Peeing in Jars With Boys” recounts the unusual personal habits of some of the men at SNL. The book ends with a strangely neurotic chapter in which she agonizes over whether or not to have another baby. (Apparently she chose to, as she recently announced that she’s pregnant.)

Though her humor can be self-deprecating at times, it is tempered by a healthy dose of self-confidence and an apparently positive body image. In a chapter listing an exhaustive number of expectations for females, she includes a list of “all my healthy body parts for which I am grateful” and concludes: “I would not trade any of these features for anybody else’s…I wouldn’t even trade the acne scar on my right cheek, because that recurring zit spent more time with me in college than any boy ever did.”

A bit choppy, it’s a very quick read and, as you would expect, pretty funny. Much of her hilarity is in the delivery so I wish I had held out for the audio which she narrates herself, but it was still an enjoyable few hours and I’m glad I read it.

Ending on a random note, this may have been my favorite quote from the book:
“I have a suspicion that the definition of “crazy” in show business is a woman who keeps talking even after no one wants to fuck her anymore.”

Tina, I hope you never stop talking!
Posted by 3goodrats at 7:39 PM