Like with any project, before I began the Whisper Cardigan I looked through the projects on Ravelry to make sure it was possible to recreate the garment in real life. Frequently, it appears to be difficult for the average person to follow a pattern and end up with anything remotely like what was pictured. Or it’s possible, but looks terrible on people not shaped like the model in the photo.

Usually I also look for comments on how pleasant, or torturous, the pattern is to work on. For instance, are you required to pick up approximately 4,367 stitches along an edge?

I mention this because it has become obvious to me that I did NOT look for such comments this time. And last week I had to pick up approximately 4,367 stitches around the opening of the damn thing. 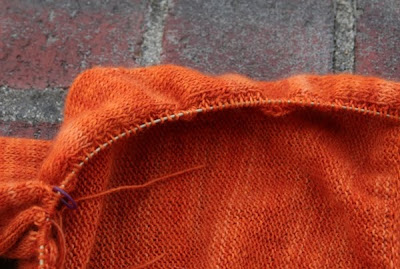 Had I read through the pattern before starting (a lesson that is apparently impossible for me to learn) I would have realized that the construction is a little different from what I’ve been telling everyone within earshot. I was under the mistaken impression that I knit the side-to-side shrug portion (sleeve, upper back, second sleeve) and then pick up stitches just along the back and work downward. In fact, after knitting that top shrug-like part, I had to pick up stitches around the entire opening. Some will be knit downward for the back as expected, but the rest form a band around the whole neckline and armhole area.

I was so surprised by this development that after spending the afternoon bent over my project in the manner of a Dickensian factory worker, I looked again at the Ravelry projects for overlooked warning signs. One of the first comments I saw regarding the picked up stitches was “I imagine it’s how the Egyptian slaves would’ve felt if told they had to build the pyramids out of field stones.” Yeah, missed that one the first time.

But maybe it’s a good thing that I was oblivious. Surely I would have foregone the entire project had I known about this and I’m really pleased with how it’s coming out. The edging really makes the cardigan look structured and pretty. 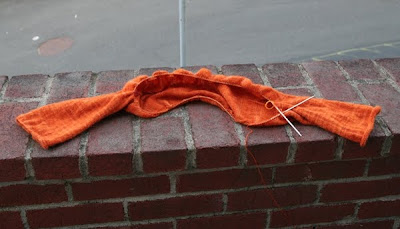 You can't tell from this photo, but take my word for it.
Posted by 3goodrats at 1:32 PM