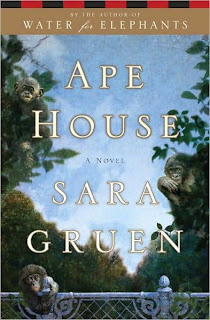 Isabel Duncan relates to animals better than people, and has truly found a home in her work at the Great Ape Language Lab, where she studies the way bonobo apes communicate. When John Thigpin of the Philadelphia Inquirer visits the lab for a story, he is instantly captivated by the apes and Isabel’s work with them. But the very next day the lab is bombed, freeing the apes and seriously injuring Isabel. An extreme animal rights group calling themselves the Earth Liberation League takes credit for the bombing and soon the apes reappear in a very public way. Isabel, barely recovered from her injuries, immediately sets to work trying to form a plan to get them back. John also tries to get involved despite a work-related setback that threatens to remove him from the story for good.

Sara Gruen spent a great deal of time with bonobos before writing the novel, so although it is a work of fiction, the animals were presented in a realistic way. The similarites between the apes and humans was amazing and, given everything that happened to them, one of the more disturbing aspects of the book. The Earth Liberation League is a thinly-veiled reference to the Animal Liberation Front, a real-life animal extremist group. (Speaking of thinly veiled references, there was also an appearance by protestors from the Eastborough Baptist Church!)

Gruen did a great job of handling animal rights issues, showing how people who all claim to care about animals can express that in such incredibly different ways. Her characters are wonderfully nuanced on this issue, making the central question of who is responsible for the bombing so difficult to discern.

The story about the apes was captivating, but the details about Isabel’s and John’s personal lives added more interest and complexity. I especially liked the storyline involving John and his wife Amanda and their simultaneous career difficulties. I loved John’s unflagging devotion to his wife, who unquestionably had some issues that made her difficult to live with. In fact they were both going through difficult times that made it hard for either of them to focus on anything other than their own indivdiuals problems, but I admired the way they persevered.

Reviews on this book were mixed, and I have to wonder if some of the reviewers just wanted another Water for Elephants. This is truly a different book, completely modern-day with some fantastic cultural satire. I don’t care what the review publications say – Gruen has proven her talent once again with this departure, and has shown that she is still at the top of her game.
Posted by 3goodrats at 7:40 AM