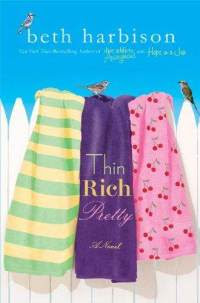 Holly and Nicola became best friends at camp, where they shared their dreams and insecurities. Holly wanted more than anything to be thin, and Nicola thought her nose was the one BIG thing getting in the way of being pretty. But they had more pressing problems, because cabin bully Lexi was driving them both crazy with her taunting and pranks. Holly and Nicola had enough and they made a plan to get back at her, though it didn’t quite go off without a hitch.

Twenty years later Holly and Nicola are still best friends. Holly owns an art gallery and is on the verge of engagement Randy, contingent on losing 20 pounds (WHAT?) Nicola is an actress who enjoyed moderate success but now is having a hard time getting work because of her looks. One day Holly runs into Lexi and finds that the girl who seemed to live such a charmed life has fallen far indeed, and Holly wants to fix the wrong she and Nicola committed so long ago.

Honestly, I chose this book only because it was the only chick lit I could find at my library on Playaway and I needed something to listen to on my walk to and from work. That said, it wasn’t bad as far as that genre goes. Some of it was contrived and hard to believe but it was enjoyable for what it was. I couldn’t believe that even someone with Holly’s self-esteem problems would put up with an ass like Randy (who as a character I found rather hard to swallow). On the other hand, I enjoyed the parts about Lexi dealing with her current-day problems and I think I liked her storyline the most out of the three characters.

Although this book doesn’t dig deep, it contains some satisfying positive themes about being true to yourself and making the most of what you’ve got. Take this book on your next flight or bring it to the beach this summer!
Posted by 3goodrats at 6:19 PM