I'm the pickle on your Big Mac 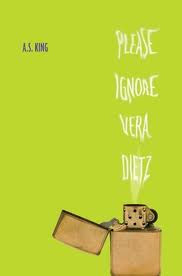 We meet Vera Dietz at her best friend Charlie’s funeral. At least they were best friends until a few months earlier when Charlie began hanging out with a new crowd, a crowd decidedly unfriendly to Vera. Things between them steadily grew worse, and then suddenly, unexpectedly, Charlie was dead. Now Vera spends her days trying to finish high school and her evenings working at the Pizza Pagoda, picking up more and more hours in an effort to fill her time and avoid dealing with what has happened. But Vera is haunted by thoughts of Charlie and the awful things he has been blamed for, by the memories of the violence in his household when they were growing up, and by the secrets he was hiding as their friendship started to fall apart.

Moving back and forth between current day and when Charlie was still alive, we can follow their friendship from its highest point to the end as Vera reflects on the past. Included are chapters from the point of view of Vera’s dad (complete with flow charts!), of “the dead kid,” even from the pagoda, a town landmark. (I do like when authors infuse life into inanimate objects to get a point across.) Lest you forget she’s still in high school, Vera infuses her weekly vocabulary words into her narrative: “Here’s me using parsimonious in a sentence…” It’s great fun to read.

And yet, it’s a dark novel with powerful and disturbing themes. Vera Dietz confronts abuse and the blindness we so often have to others’ pain, and addresses our responsibility to step in and help other people - even those who have betrayed us - as well as our guilt when we do not do so. On the surface there is some fun stuff like romance and Vera’s witty observations about her job and the world in general, but the undercurrent is sinister.

I hesitate to compare it to one of my favorite books of all time, but this novel reminded me a little of The Perks of Being a Wallflower. They’re both definitely for the older YA crowd, containing some pretty upsetting things which are slowly revealed throughout the book. The writing style is different but the feelings I had about the themes and characters are so similar. This is a book I’ll be thinking about for a while.

Be sure to check out FYA’s review too, as well as this post which includes a video in which A.S. King discusses Vera, shows us the pagoda, and expresses strong feelings about organic lettuce. Then go read the book!
Posted by 3goodrats at 7:55 PM

Well written! I might just read it... but then again, I have 1 day left on "PRESCRIPTION FOR CHAOS!" so I have to finish that first. :)