Silly title, but a good book 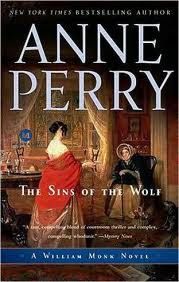 Hester Latterly is between jobs and sees an ad in the paper looking for a nurse to accompany an elderly lady as she travels from Edinburgh to London. Having never been to Scotland, Hester thinks this would be a lovely way to spend the time before her next job starts. Little did she know that the poor woman would die in her charge and Hester would be charged with murder! Thrown into jail, she can only sit helplessly by as her friends William Monk and Oliver Rathbone try to find information to exonerate her and find the real culprit.

I’ve been listening to this series on audio off and on for a few years. These older titles appear to no longer be available to download or on CD so I was stuck lugging around a hardcover copy. It’s worth it though. I love these Victorian mysteries with all their society scandals and strange (to me) customs of that time and place. Because I don’t generally read mysteries I can’t compare these, but to me they are complex and unpredictable.

I really like Hester Latterly – she is not from wealth, but she’s respectable, smart, and tenacious. I imagine that she is a plain woman, and I know she cares little for looks. She is down to earth enough to imagine she may end up single her whole life because so many men are put off by her intelligence and independence. But she would rather be true to herself than be frivolous in order to live a conventional life and fit in with society. When she was working as a nurse during the Crimean War she saw horrors enough to ensure she’d never be a shallow society lady even if she wanted to.

This series is great for wintery or rainy-day reading. Curled up with an afghan and some tea, this is the perfect engrossing read for a cozy afternoon.
Posted by 3goodrats at 1:20 PM