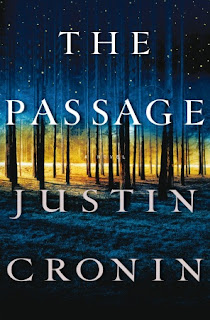 Deep in the jungle of Bolivia scientists discover a virus that kicks a person’s thymus gland into overdrive, increasing their immunity and their lifespan. In secret government experiments, death row inmates are transformed into powerful creatures that the military hopes to use as weapons. Of course they turn out to be stronger and more powerful than anyone thought, escaping the military lab and decimating the American population.

The final subject of the experiment hadn’t been a death-row inmate at all, but an abandoned little girl named Amy. There is something very unusual about her to begin with, and it she is affected differently by the virus. It soon becomes clear that she will play an important role in saving what is left of civilization.

After the world changed, we skip forward to the year 92 A.V. and visit the Colony, a settlement in California where fear of virals has become a way of life. The walled town uses sentries and constant light to keep virals away, but their batteries will not last much longer and when the lights go out they are doomed. When one of the residents detects a far away radio signal, a group sets out for Colorado in hopes of finding help.

Because of the isolation in this new world, each settlement is like a separate culture. Every time the book shifts to another time or place, the reader’s worldview shifts with it. Rounding out the story are excerpts from documents such as evacuation orders, newspaper stories, and journal entries presented at the Third Global Conference on the North American Quarantine Period, held in 1003 A.V. Intriguing!

The Passage is a daunting tome of a book - the ebook version is 836 pages but unlike many lengthy books, it’s not because it is poorly edited. It’s well-crafted and polished, but simply a huge, epic story that could have easily been split into more than one book. Upon finishing I felt exhausted and drained, as though I experienced everything the characters did. It was a long journey fraught with hardship and peril, and I narrowly escaped with my life. Yes, it was that good! I felt propelled by this riveting story and completely caught up in the world Cronin has created. Many characters entered and exited the story, but he fleshed them out well enough for the reader to not only keep track of them, but care about them. The lengthy apocalyptic nature of the book and the many mysteries and side stories remind me of a combination of The Stand and Lost. You can’t get much better than that.

Book two, The Twelve, is due out in 2012. In this interview Cronin talks about it a bit and says the twelve are not who we think they are. I’m very much looking forward to continuing this adventure but I’m glad it won’t be right away. It may take me a full year to recover enough from my arduous journey to be able to start another book like this.
Posted by 3goodrats at 3:18 PM