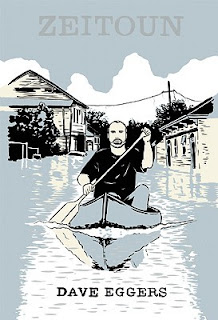 Abdulrahman and Kathy Zeitoun knew that hurricane Katrina was coming. Unwilling to leave all their contracting jobs and rental buildings, Abdulrahman (known simply as Zeitoun) decided to stay behind in the city while his wife fled with the kids. After the storm, Zeitoun traveled around his New Orleans neighborhood in his second-hand canoe, helping neighbors, distributing water, and feeding abandoned pets. Using the one working phone in the neighborhood, Zeitoun and Kathy spoke daily. One day Zeitoun was picked up by a group of armed men and thrown into a makeshift outdoor prison, entering a nightmare of bureaucracy and injustice.

What was at first just an interesting story became almost surreal, and I had to remind myself that this was happening in the United States. Of course I heard a lot about mismanagement after Katrina what with the miserable conditions and looting and whatnot, but I hadn’t really heard about such flagrant civil rights abuses as this. And this is just one story.

The Zeitoun family were interesting in and of themselves. Abdulrahman grew up in Syria, and Kathy was from Louisiana and had been a relatively devout Christian before converting to Islam when she was in her early 20s. Already divorced and with a child, she met Abdulrahman through friends and after marrying they built and ran a successful business together. A Muslim couple living in Louisiana post-911 is bound to face prejudice and they did, not the least of which was from Kathy’s family.

Although it is non-fiction, the book reads like a novel with background fleshing out the story in all the right places, and intimate glimpses into Zeitoun’s thoughts and memories. Eggers conducted extensive interviews, even talking to the people involved in Zeitoun’s arrest and incarceration. The result flows seamlessly, sweeping the reader along on a captivating and unforgettable ride.
Posted by 3goodrats at 10:04 AM