Sisters, sisters, there were never such devoted sisters...

The Vanishing Act of Esme Lennox by Maggie O'Farrell (2006) 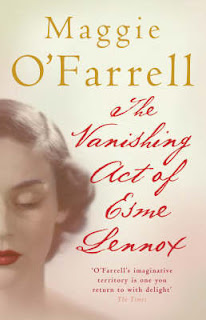 Imagine a world in which a young woman could be put into psychiatric care because she enjoyed taking walks alone or because she eloped or because she liked sex. That world existed, and not so long ago, and it was in that time that Kitty and Esme Lennox were growing up. Though raised in India, after a tragedy befell the family the girls were brought back to England. Kitty had no problem conforming to English society, and was just as eager as her parents at the prospect of being married off to a suitable young man. But not Esme. She is solitary, temperamental, dreamy, and doesn’t want to be told what to do. None of which are favorable qualities in a young lady at that time.

Fast forward 60+ years and meet young Iris Lockhart. The owner of a vintage shop, her only family her step-brother Alex, she is self-sufficient and independent, though her personal life is a bit of a mess what with her involvement with a married man. Out of the blue one day she receives a call from a psychiatric hospital which is closing down, telling her that, as next of kin, she is responsible for Euphemia Esme Lennox, a resident now for sixty-one years. Thing is, Iris’s grandmother Kitty (now in a nursing home) always said she was an only child. Iris will soon discover that this is just the beginning of a whole web of secrets in her family history.

O’Farrell has spun a fascinating tale of sibling relationships, carrying us back and forth in time between the present day sisters and the young women they once were before Esme’s incarceration. Her writing is clean and simple, and a little bit ethereal. Esme, while arguably not crazy, has an imagination and after some of the things she has been through her thoughts are scattered. Kitty has Alzheimer’s and the passages written from her perspective jump from thought to unfinished thought, yet the story is remarkably easy to follow.

At about 250 pages, it was a surprisingly quick read. Although Kitty and Esme’s story is the central one, I found Iris and Alex’s relationship equally compelling. It was complex and unresolved, and I was left wanting more. Haunting and a little bit eerie, this is a novel I won’t soon forget.
Posted by 3goodrats at 9:57 AM