Something Blue by Emily Giffin (2005) 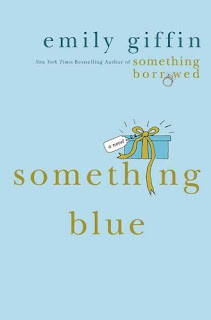 (Spoiler alert! If you haven’t read Something Borrowed or seen the movie I am about to give away the ending!)

There may be nothing more satisfying than watching a shallow, self-centered, stuck-up woman get her comeuppance. We last left Emily Giffin’s cast of characters sorting out a love triangle that did not end well for Darcy Rhone. She found her fiance in his underwear in her best friend Rachel’s closet and, needless to say, the wedding was off.

Something Blue picks up soon after, with Darcy feeling as if everyone in her life has conspired to betray her. Never mind that Darcy was also cheating on Dex with his friend Marcus – that is obviously completely different! Having lost both her fiance and best friend, Darcy tries to move on making the most of her obviously doomed relationship with Marcus, at which point she accidentally gets pregnant.

Darcy has always had everything, and now she can’t even keep a guy she thought was beneath her, and she was pregnant to boot. The logical thing to do in this situation is of course to move to London without a work visa or viable plan, and stay with a friend who really doesn’t want her there. Darcy and Rachel’s mutual friend Ethan is a struggling writer living in a small flat in London, and clearly has little patience for Darcy’s drama and frivolity but grudgingly lets her come stay with him, and this is where the story really takes off.

Darcy is still shallow, self-centered and snobby (and the narrator in the audio version also made her sound whiny) and this book put me in the strange position of being inside the head of someone whose misery I was glad for. Darcy is incredibly demanding and annoying and deserved every bad thing that happened to her.

But it’s not quite that simple, thank goodness. As things go from bad to worse Darcy finally gets a wake-up call and realizes she needs to make some significant changes in her life if she doesn’t want to lose every friend she has, and she becomes much more tolerable from here on out.

For a new mother-to-be, Darcy spent remarkably little time thinking about her pregnancy and planning for motherhood, and a whole lot of time shopping and thinking about snagging her next boyfriend. But it is chick lit after all, and we are obliged to have some fun and shirk our responsibilities. Although it was a little too easy for Darcy to suddenly grow a conscience and turn her life around, I was relieved when she became a more sympathetic character. This isn’t a book to put much thought into since it just doesn’t go very deep, but it’s enjoyable for its surface appeal. I’ll probably grab another of Emily Giffin’s novels the next time I’m looking for an audiobook.
Posted by 3goodrats at 7:37 AM