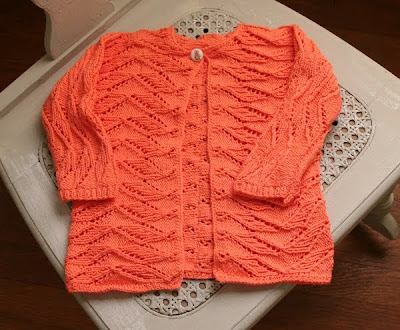 I’ve been knitting this as a gift for friends who are expecting their first baby. It took me just under two months to make this sweater, but it felt like much longer. Lace is aggravating torture, but so pretty. Isn’t this a lovely little sweater?

Choosing a yarn is frequently the most difficult part of a project, and it was especially so this time. I wanted a bright color, it needed to be fingering weight, appropriate for a baby (i.e. not expensive or delicate), and I wanted to avoid animal products. Cotton seemed like a natural choice, especially since this will be worn in the summer (but in San Francisco, so a sweater will frequently be needed!) I don’t know the gender of the baby but it doesn’t really matter as the colors I like tend to not be especially gendered. Ultimately I wasn’t totally happy with the color as I wanted orange and it’s more of a coral - but it’s for an infant, a blind person, and a colorblind person. None of them will know what color it is anyhow. 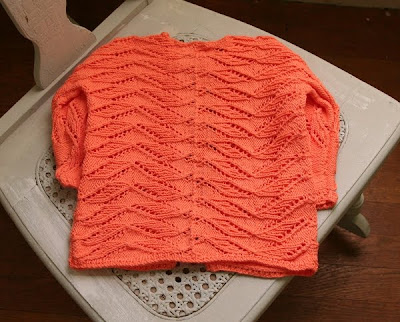 The sweater is knit from side to side in two pieces, beginning at each sleeve and working towards the middle, then grafted up the back with kitchener stitch. The pattern just says to kitchener the back together and refers to general kitchener instructions in the back of the book. There was no mention of how to kitchener something that is not stockinette, but the rows of live stitches I was working with were almost in reverse stockinette (6 p, 1k, etc) so I just followed the instructions doing it from the wrong side (the mostly-knit side) instead of from the right side. Confused? Me too. It would have been helpful for the pattern to include a tip on how to approach this. Mysteriously, there is also no picture of the back of the sweater in the book so perhaps the designer didn’t know what she was doing either. Although the seam is very obvious, I am choosing to think of it as a design feature rather than crappy seaming.

I was most worried about the crochet edging, which turned out to be a piece of cake. The crowning glory, of course, is this adorable Beatrix Potter button. 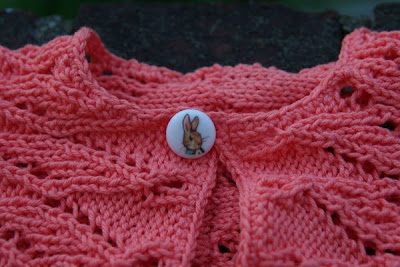 For some reason I had a particularly difficult time getting decent photos. The color was hard to capture too, but I think it's fairly accurate in the first two photos.

All in all I’m pretty happy with the result but even more happy that it’s done and can be mailed off to the parents-to-be while the baby is still in utero. And I can finally move on to other projects!
Posted by 3goodrats at 7:30 AM