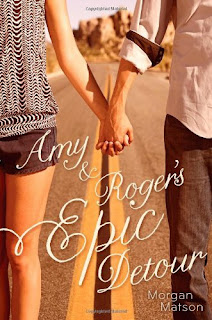 There is nothing like the freedom of driving the open road with no plan and someone else’s credit card. But Amy’s not looking forward to her cross country drive. Just three months ago her father was killed in an accident and now her family is relocating from California to Connecticut. Tasked with bringing the car across country, Amy - who now refuses to drive - will be accompanied by Roger, a college student and friend of the family. Initially awkward around each other, Amy and Roger slowly begin to get along, soon deciding that the mapped-out route from Amy’s mom is boring, so they decide to go a completely different way. That’s where the fun begins! As you can guess from the cover, there is a budding romance between Amy and Roger, and it is well worth the wait.

And it IS a wait – both characters are struggling to deal with issues that overshadow any romantic feelings they may have for each other. Amy has been unable to open up about her father’s death and the guilt she feels about it. To make matters worse, her twin brother is in rehab which is just one more secret she must carry around. These burdens weigh heavily on her during the trip, and she shuts out Roger’s friendliness for quite a while. Roger is still trying to work through the end of his relationship with his girlfriend Hadley, and part of the road trip detour is his effort to track her down and talk to her about what happened between them. Watching Amy and Roger both work towards acceptance and help each other to move on was sweet and touching and, in a way, watching their friendship slowly blossom was more satisfying than the usual chemistry-and-hormone laden relationships in young adult novels (though I love those too!)

The road trip aspect of the book is pretty awesome. They experience so many different places, like Yosemite, Graceland, and Highway 50 (“the loneliest road in America,”) and most importantly they EAT in all of the places they drive through. Their fare is somewhat limited to fast food, but there is apparently a wide regional variety of burgers in the US. (Especially interesting was NuWay Burgers in Kansas, boasting the motto “Crumbly is good.”) Most fun of all, the book is filled with photos, journal entries, drawings, receipts, and play lists. It’s so fitting, like a big road trip scrapbook.

It turns out Amy and Roger’s trip was based on a cross country trip the author took, and the photos included in the book are from her trip. If you’ve been hankering to hit the road yourself, you may find that Amy and Roger’s adventure is so satisfying it’s really the next best thing to taking a road trip for real. This is the perfect summer novel, so be sure to pick it up soon!
Posted by 3goodrats at 8:32 PM

Someone really smart must have picked that out for you. :) Can I borrow it?