Tipping the Velvet : a review

Tipping the Velvet by Sarah Waters (1999) 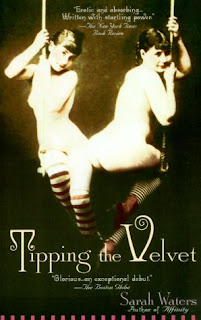 From the oyster houses of Whitstable to the music halls of London, teenager Nancy Astley comes of age in Victorian England in Sarah Waters’ remarkable first novel. Nancy is perfectly content working in her family’s restaurant and spending her free time visiting nearby music halls, but when she sees a performance by male impersonator Kitty Butler, her life changes forever. Nancy immediately falls in love with Kitty, befriends her, and eventually moves away with her to help out in her act. Just friends at first, their relationship turns to romance, but Kitty folds under the pressure of living a secret life. After their dramatic break-up, Nancy journeys through the fascinating underbelly of London society as she dons a suit and works as a male prostitute, spends a year as a woman’s sex slave, and joins up with a brother and sister team of socialists.

Waters was an academic before she was a novelist, and it shows. Her attention to details of the period, such as the slang, make her story feel unusually real. Descriptions are lush and rich such as the wonderful parts about the restaurant and the process of preparing oysters, Nancy’s first impressions of the unsavory Dead Meat Market, and the lavish parties thrown at Diana’s mansion. I’ve never read a depiction of Victorian times that included this underworld of illicit sex, lesbianism, and male impersonation but considering the author’s background I suspect it’s based on reality.

Nancy was a very sympathetic character who goes through many changes throughout the book, and it’s hard not to feel her pain and loss. The most upsetting part, I think, was the disintegration of her relationship with her family. Nancy didn’t simply leave them behind without a second thought, but it was incredibly difficult to reconcile her family life with her new life. After being with Kitty for about a year, she goes back home to visit. But she had made the mistake of revealing her true relationship with Kitty in a letter to her sister Alice. Now Alice, who had long been Nancy’s best friend and confidante, wants nothing to do with her. She doesn’t tell the rest of her family what she has told Kitty, and she doesn’t go back to visit them again.

Every time a relationship ends, Nancy is left totally alone with nothing, and must start building a life almost from scratch. She reinvents herself over and over, as though trying to settle on her true self. It’s honestly rather exhausting and makes the book feel epic, even though it only spans 7 or 8 years. But it wasn’t tiresome at all – I loved every bit of it.

Before I started the book I planned to watch the movie afterwards, but there’s no reason to. Waters has created something so lush and complex I doubt it could be captured properly on two hours of film. I want my impressions to stay as they are and not be tainted. I will, however, plan to read more of her books! I’ve already enjoyed The Little Stranger, but she has several more to choose from as well.
Posted by 3goodrats at 6:19 PM

Sounds like an amazing book - but I wouldn't be so quick to dismiss the movie just because of that, either. No, movies can never be "the same" as a good book or capture the same energy, but they can be beautiful, and they can give a fun two hours (sometimes three). Plus, movies give other things than books...
What I'm TRYING to say (in too many words) is that one has to appreciate a movie as a movie without feeling like it has to 'measure up' to any given book. :P

You have a good point. I think I just need to wait a little while before watching the movie so I can distance myself from the book and not be so quick to make comparisons!