The Imperfectionists by Tom Rachman (2010) 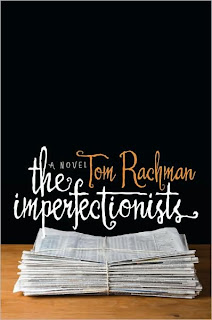 In Tom Rachman’s debut novel an international newspaper in Rome struggles to stay afloat amidst the challenges of modern publishing and its own poor management. In each chapter the reader is introduced to one character associated with the paper, followed by a short chapter from the early startup days. Along the way we meet Arthur Gopal, obituary writer, completely unambitious until his family is struck by tragedy. Paris correspondent Lloyd Burko grasps at straws in his effort to write a story the paper will run, while trying to reconnect with his estranged son. Ruby Zaga a bitter (and I am convinced, slightly mentally ill) copy editor is convinced she is about to be fired. Perhaps my favorite character was a dedicated reader of the paper, Ornella de Monterecchi, who was so intent on reading every word of every issue that in 2007 she was still reading papers from 1994.

The Imperfectionists was not what I expected. I anticipated a story defined by its Italian setting, but the artchitecture and culture took a back seat to the colorful lives of the characters, which were the real heart of this novel. They were a strangely compelling lot. I didn’t like most of them – I certainly wouldn’t want to be a coworker or friend of any of these people - but I couldn’t get enough of spying on them from afar.

As you would expect, the shift of focus in each chapter prevented a typical story arc, but it felt neither disjointed nor unfocused. Each character’s chapter contributed to the overall narrative in a cohesive way, feeling more like an addition than a shift. This novel was less a traditional story with a beginning, middle, and end than a large and detailed picture of that particular time in the newspaper’s life, but with enough background that you have some understanding of why the situation is the way it is. The pacing was steady though, so even though there was little forward momentum, it felt like there was.

The last couple of chapters had rather abrupt upsetting endings and although I was just getting to know the characters, this created a strong emotional impact. And this is the beauty of Rachman’s writing: his ability to draw the reader in immediately, make us care about a character within the first page, and not want to let them go.
Posted by 3goodrats at 9:46 AM