Amelia Lost: the life and disappearance of Amelia Earhart by Candace Fleming (2011) 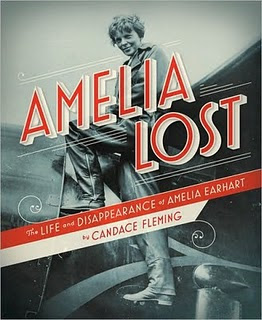 On July 2, 1937, Amelia Earhart was supposed to touch down on tiny Howland Island in the Pacific, one of the last stops on her flight around the world. But she never arrived. For days afterward many people claim to have heard her cries for help on their shortwave radios, but Earhart and her navigator Fred Noonan were never found. Amelia Lost recounts Earhart's early life, her training as a pilot, and her career, with chapters alternating between the biographical and those describing her disappearance and its aftermath.

I thought Fleming did a great job of conveying the complexities of Earhart's life and made her more three-dimensional than is usual in books written for children and teens. Amelia's headstrong personality and drive to become a pilot were evident early on, and given the fact that she didn't conform to contemporary expectations for girls, it wasn't a surprise that she developed a friendship with early feminist Eleanor Roosevelt. Fleming did not gloss over the more unpleasant but important formative aspects of Earhart's young life either, including a chapter on her father's alcoholism, nor did she leave out criticisms of how Earhart used her fame to make money.

The comprehensive book also included a lot of contextual information about the early days of flying, which I found fascinating. Apparently, in early planes sometimes the engines would just stop in mid-air! During 1920, the first year that the postal service used planes, they hired 40 pilots in May and 15 of them were killed by the end of the year. The risks of flying at the time when Amelia Earhart decided to become a pilot really puts her efforts into perspective.

But there were also fun details about less scary aspects of life. Some of the extras included a brief introduction to Morse code, a description and photo of the bloomers Amelia and her sister wore for active play, and even a photo of one of Amelia's report cards. This was all packed into just 110 pages, but in a surprisingly easy-to-read layout with plenty of pictures and sidebars.

Amelia Lost was fascinating and engaging, detailed enough to make me feel like I've gotten to know what Amelia Earhart was really like. The easily digestible format makes it accessible to young people as well as those of us with short attention spans. I really enjoyed how Fleming captured the excitement of the search for Earhart and her plane, though I thought the childrens' reports of hearing Amelia's calls for help were incredibly creepy! Altogether I found it very well done and thoroughly enjoyable and recommend it to anyone who wants to learn more about this slice of U.S. history.

Speaking of which, this counts towards my goal of learning more about American history this year. A goal at which I have been failing, but I haven't given up yet!
Posted by 3goodrats at 8:12 AM