House of the Seven Gables : a review

House of the Seven Gables by Nathaniel Hawthorne (1851) 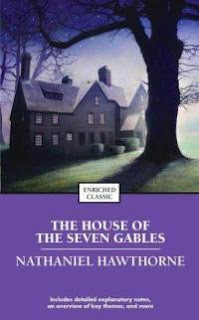 The Pyncheon family house in Salem MA was built after essentially stealing the land from a family of witches, and consequently the Pyncheons are said to be cursed. Our story begins with one of the descendents, Hepzibah, an old spinster who has fallen on hard times and must open a shop in the house. A young vivacious relative, Phoebe, suddenly arrives from the country in time to be a great help in the shop. Hepzibah’s brother Clifford also arrives around this time after spending much of his life in prison. Their relative Judge Pyncheon, the one responsible for Clifford going to prison, arrives eventually to try and get information from Clifford regarding a land claim in Maine. Hepzibah doesn’t want him to confront Clifford, and it all ends rather badly for the Judge. The other characters apparently live happily ever after.

Slow and plodding, there is little action but much background and description. I enjoyed parts of it, such as Hepzibah’s first day at her new shop, which was amusing and a humorous in a melodramatic way. Other parts were a bit overdone for my taste, specifically the part where a certain characters sits dead in a chair and an entire chapter is devoted to an obtuse narration of his countenance, the appointments he is missing, gosh it is really unlike him to dawdle, why does he still not rise and what is that crimson bib upon his suit? I mean really now, we get the point. But that is the only part I didn’t really like. Because the action all took place in the house, I kept picturing this like a play with the entire outside world off-stage and invisible.

The characters were really fun and the best part of the book. I love a good spinster rattling around an old house, and young Phoebe was a nice fresh-faced counterpoint to her character. Clifford and Uncle Venner both provided comic relief, as did young Ned whose primary role was to dash into the shop and buy more cookies. Judge Pyncheon was an imposing villain. The only character who was presumably not actually associated with the family was the dageurrotypist Holgrave, who boarded with Hepzibah. Despite his radical ideas she liked having him around, and he eventually began a romance with Phoebe. We eventually learn that he does in fact have some interest with the Pyncheon family.

In high school I read the Scarlet Letter and I remember finding it really difficult to read but still liked it a lot. Although House of the Seven Gables was good, I’m not sure whether it was worth the effort of reading it. But I feel like a virtuous New Englander for doing so. Maybe soon I’ll finally take a trip to Salem to see the house that inspired the novel.
Posted by 3goodrats at 9:22 AM