Prisoners in the Palace by Michaela MacColl (2010) 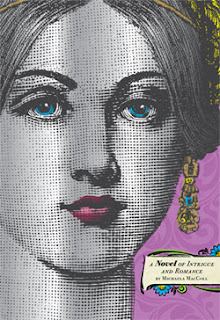 It is 1836 and Liza Hastings’ parents have just been killed, forcing her to leave her luxurious apartments at an upscale hotel and take a position as lady’s maid to the young Princess Victoria. Little did she know the scandal and intrigue that awaited her, nor did she expect to play such an important role in Victoria’s ascension to the throne. Kensington palace is shabby and run-down, and Victoria is completely sheltered and treated like a child though she is 17. Victoria’s mother and Sir John are trying to prevent Victoria from becoming Queen when her uncle the King dies. Liza is also chagrined to find out that Victoria’s last maid was forced out for secret scandalous reasons.

This novel is richly detailed, including fashion, social mores, and conversational expressions of the time. It includes different classes of people, each with their own conventions and social expectations. MacColl even includes flash patter, a difficult-to-decipher dialect spoken by thieves and street people but which ultimately saves Liza from a dangerous situation. There’s also a passage in which Will, a publisher of broadsheet newspapers, tells Liza about a new serial called The Pickwick Papers by the writer Boz, who Will explains is actually a court reporter named Charles Dickens. All of these elements contributed to the realistic feel of the story, and made it more fun to read too.

The pacing is slower than in many young adult novels, but it didn’t detract from the appeal at all. I was swept into the intrigue and worried for Liza and Victoria as they tried to circumvent the machinations of the Duchess and Sir John. The two young women had been raised very differently, and I enjoyed watching their complicated relationship develop.

I had only a couple of minor quibbles with the novel. When Liza first began her job, she made sure not to risk her position in fear of a life on the streets, but as time went on she became more brazen and did things that I thought were out of character. For instance, she stole one of Victoria’s gowns to attend a ball to which she wasn’t invited, a rather unimportant thing to risk one’s position over. This was especially surprising considering what she had learned about the fate of her predecessor. In addition, Victoria's mother did not seem very real to me. I had a hard time with her apparent indifference/hatred towards her own daughter. She was under the influence of the underhanded Sir John, but I still thought her character could have been more developed, perhaps portrayed her as torn between Sir John and Victoria.

Other than that it was pretty fantastic. Usually I don't like novels based on historical figures as it only confuses my already muddled sense of history, but I took a chance on this and I'm very glad. Luckily, it turns out that many of the details of this novel are accurate so I'm not becoming more misinformed. Throughout the novel were excerpts from the young Victoria's diary, which turned out to be authentic. Apparently Victoria kept extensive journals throughout her life, and I thought it was a nice touch that the author included some passages. I also don’t want to overlook one of the nicest aspects of the book – the art on the cover and interior of the book. It only adds to the fancy royal feel. If you enjoy historial fiction, I highly recommend picking up a copy of this book.
Posted by 3goodrats at 7:26 AM