I ain't seen the sunshine since I don't know when...

The Patterns of Paper Monsters by Emma Rathbone (2010) 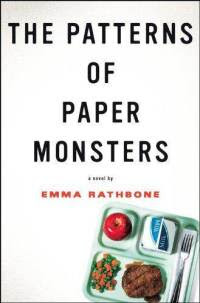 7:30 Lights on. 8:00 Breakfast. 9:30 Class. 11:30 Lunch. 5:30 Dinner. 6:30 Chores. 9:30 Lights out. It is always freezing and Jacob always has to pee at the worst possible time, when he surely won’t be granted permission. His bleak outlook on life isn’t improved by the conditions here at the juvenile detention center, nor does he respond to sessions with his therapist Lane. Only when he meets Andrea does he start to feel some hope, and eventually they kindle a bit of a romance, as much as they can in a place where boys and girls are almost always separated. When he meets the creepy new inmate David, Jacob must chose whether to remain indifferent or stop David’s violent plan from becoming reality.

Jacob could easily be an unlikeable character, what with his not caring and his dislike of most people around him. Luckily, he has a sarcastic and dry sense of humor that Rathbone has infused with colorful and unexpected language. Jake can be pretty raunchy, but he’s a teenager so that’s no surprise. I’m glad his language and thoughts weren’t sanitized and unrealistic the way they are in so many young adult novels.

Despite his withdrawal from social interactions he is clearly smart and thoughtful, which is displayed in the few instances in which he engages in conversation. When Pastor Todd asks Jacob what he thinks God’s plan is for him, Jacob points out the contradictions in Pastor Todd’s assertions that God has a plan for him, but that he has a choice. Pastor Todd changes the subject and abruptly leaves.

Although Jacob is cynical and hostile, it’s clear that the adults around him do care about him and want to help even if their efforts are sometimes misguided. It’s no wonder that he doesn’t trust people, given the disappointments in his life with his mother and her abusive boyfriend who Jacob has dubbed Refrigerator Man. Jacob is a guy on the verge, who could easily be pushed further into his dark hole of depression and anger. But it’s his brief moments of hope and happiness that make us root for him, and keep our fingers crossed that he’ll take a step towards making his life a better one.
Posted by 3goodrats at 9:23 AM