Summer lovin', had me a blast 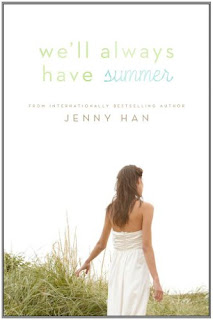 This is the third in a series, so there are spoilers from the first two books. And also this one, but believe me when I say it doesn’t matter.

Isabel/Belly has grown up with Jeremith and Conrad, and though she has always been in love with Conrad, it is Jeremiah whose feelings for her have always been apparent. After a couple of books of angst, she hooks up with Jeremiah at the end of It’s Not Summer Without You.

Book three skips ahead and starts right off by saying that Belly and Jeremiah have been together for two years and are super serious. Almost immediately we find out that he has cheated on her. Jeremiah’s betrayal is a big drama so of course the solution is to get married right away. The bulk of the book is all about planning their wedding, and Belly’s unresolved feelings towards Conrad who is the one she’s actually been in love with for her whole life. I think we all know how this will end.

Sadly, the ending is unsatisfying as it skipped ahead a year or so in the future, leaving out the part that would have actually been exciting to experience and would have made the whole book worth it. This seems to be a common book ending trend - skipping ahead and leaving out the actual ending - and it is a trend I do not like. I want to experience the protagonist getting together with her love interest, not join them later on when they’ve settled into their relationship.

There were so many things wrong with the plot of this book, not the least of which is a 19-year-old planning to marry a guy who has just cheated on her. I didn’t even care about the cheating since I had JUST found they were allegedly such a serious couple. Also! Just after we learn about the cheating, we find out that Belly and Jeremiah have never had sex. Wtf! We are supposed to believe they are seriously in love, and they haven’t even had sex? You are in college now! You even sleep in the same bed sometimes! This bizarre situation isn’t even really addressed except to say that Belly wanted to wait to make it “special” (gag). Apparently these kids are untouched by the hormonal urges that plagued the rest of us during our teenage years. Their ability to so easily stick to chaste kisses should have clued them in to the doomed future of their so-called relationship.

I can’t think of many specific positive things to say about the book, although I did give it 3 out of 5 stars on Goodreads. What can I say? Like the first two books in this series, it is filled with the sights, smells, and tastes of summer. So although it left me unsatisfied, I did kind of enjoy the brief time we had together. But I may just go back and re-read the first book in hopes of erasing the stupidity of this one from my brain and replacing it with the fond memories of previous summers.
Posted by 3goodrats at 4:21 PM