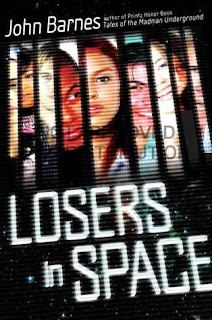 In 2129, celebrity is more important than anything. So important, in fact, that horrible crimes can be excused if there is overriding media interest. Susan and her peer group, not exactly friends, are the children of celebrities but themselves are unpopular and hopeless. Her kind-of-boyfriend Derlock concocts a plan for all of them to stow away on a ship to Mars, thus increasing their celebrity ratings. But little do they know what he actually has planned...

Told in first person from Susan's point of view, each chapter begins with the kids' location in space - how many kilometers they are from Earth and from Mars. There are also diagrams showing the orbits of Earth, Mars, and the ship Virgo. The author also included frequent "Notes for the interested," his solution for the info dumps that so frequently interrupt the flow of science fiction stories. His idea is that you can read these notes if you want to understand the science, or skip them if you want to stick to the story. I read them, but didn't always completely understand. (Then again, I don't think I've ever gotten higher than a C in a science class in my life.)

There were many awesome things about this book. First of all, science! A teacher could totally sneak this into a curriculum and trick students into learning things. Putting it into the context of a story makes it seem more real than the abstract theories we learned in school. It's also fantastic to just see more hard science fiction. If you read a million book reviews as I do, you'll notice that the "science fiction/fantasy" sections of the review journals are about 95% fantasy. It's so refreshing to see actual science fiction out there.

But aside from all the science-y factors, this is a great story about friendship. Most of these kids weren't real friends before their adventure, but more like casual acquaintances. One exception is Susan and Fleeta, who were close friends until Fleeta start using the drug happistuf, which destroyed her brain. She's still nice, but not the same person she used to be. A complicating factor in their society is that everyone is pretty much on a reality show, so friendships tend to contain a lot of drama just for ratings. Near the beginning of the trip, Susan and Emerald talk about how if they had been friends before, their rivalry and reconciliations would have been great for the "meeds" (media feeds.) However, floating around in space, they are not only somewhat insulated from the media, but they also must depend on each other like they've never had to before.

Their adventure in space is fraught with danger and tension as the group tries to survive. Just imagine a bunch of teenagers who have never needed to be responsible for anything suddenly in charge of a spaceship and needing to somehow manufacture their own rescue. Now imagine if one of them has a brain partially destroyed by happistuf and can barely take care of herself. And another is too emotionally crippled to think clearly or do much of anything except cry and feel depressed. And then another manages to betray them all in a way that appears to make rescue impossible. As if that wasn't enough, they all have to figure out how to take care of an illegally engineered pink elephant. So many challenges!

There is so much more I could say, about their screwed-up legal system or the consequences of information overload. The only thing I didn't especially like was the epilogue - it was one of those far-future epilogues à la Hunger Games and Harry Potter and I didn't think it was necessary. Other than that, it's a fantastic novel of friendship, betrayal, and the power of a good news story.

Have any of you read anything else by John Barnes, either YA or adult? Do you recommend it?
Posted by 3goodrats at 6:30 PM