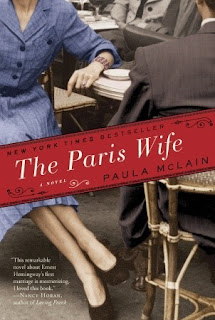 In 1920 Chicago, Hadley Richardson is living with her sister and brother-in-law, and still recovering from her mother's death. When she meets and is wooed by a man named Ernest Hemingway, her life changes almost overnight. After their whirlwind courtship and wedding, the couple finds themselves part of a group of American expatriates in Paris. Their new friends are mostly writers who seemingly spend more time drinking than writing and for whom monogamy is passé. Now with a young child, the unfortunately nicknamed Bumby, Ernest struggles with his writing and Hadley tries to support him emotionally, all the while desperately trying to hold their marriage together.

Hadley is committed to helping Ernest succeed, and is willing to make sacrifices. Yet she sinks into complete despair when he must leave her for a few weeks on a writing assignment. Surrounded by friends with open relationships and multiple lovers, they nonetheless try to preserve their relationship, but it's a challenge from the start.

Of course we know from the beginning that their marriage will fail, but McLain tells the story so beautifully that it hardly matters. Her clean prose is so evocative of that place and time that it transports you there. It's one of those rare books which you can enjoy for the writing alone; I read some of the passages over and over because they were so exquisite.

More than anything, this book made me want to re-read The Sun Also Rises, which I haven't read since high school. What I mostly remember about it was everyone getting drunk and going to bullfights, and that atmosphere of hedonism and disillusionment is captured quite well in this novel. Whether happy or troubled, every occasion or mood called for a drink. Out for a night on the town with their friends, or home feeling despair about their crumbling relationship, Hadley and Ernest frequently turned to booze to celebrate or smooth things over. The results were the highest highs, the lowest lows, and an all-around moody novel, which I mean in the best way possible. Normally, I don't like to read fiction that gets this close to people who actually existed, but I'm glad I made an exception in this case.
Posted by 3goodrats at 12:32 PM