Hello! It's been a shamefully long time since I've posted about my knitting, and I'm afraid I have little to show for it. After posting about the Jack-in-the-Box Mittens lo those many weeks ago, they've languished in my knitting basket untouched until two days ago. When I picked them up again it took me a good twenty minutes to figure out where I had left off before I could start knitting again. I had helpfully left a post-it note over the part of the pattern where I had left off. Not so helpfully, the post-it had notes on it from a previous part of the pattern and I didn't realize for quite a while that although the post-it was relevant the writing on it was completely irrelevant. Anyhow, I eventually managed to pick up where I left off. 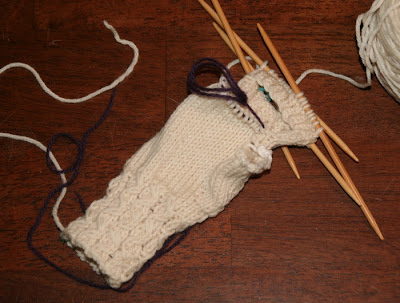 This will be so much nicer looking when it's done. Also! I totally forgot to take pictures of the back, which is where the cables are. So just imagine that you're looking at a really lovely cabled pattern.

I had forgotten the extent of my hatred for double-pointed needles. Honestly, how do any of you use these? Why do they still exist? They are the most fiddly, annoying, obnoxious tools that never fail to make me feel like I'm trying to juggle a porcupine. They manage to always be in the way of each other, yet not be close enough together to make the knitting come out right. They are so annoying they defy the laws of physics.

Anywho, in the picture the thumb stitches are on white scrap yarn and the palm stitches are on the purple scrap yarn. I'm knitting the top and just have another inch or so before binding off. Then I go back to the palm and thumb and finish those. Hopefully soon, then I can knit the other mitten, then I can burn those stupid needles so I never make the mistake of using them again.

I also finished my first Ribbed Lace Sock and have begun the second. 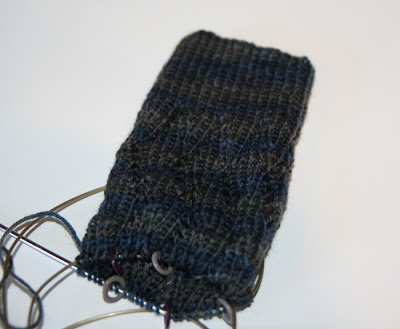 I know, it doesn't look like much, does it? But it feels great and will keep my feet warm this winter.

Progress has continued on my Les Mis Wrap as well, though I fear it may be a scarf instead of a shawl. More on that as it progresses. I only have 1.5 pattern repeats left out of a total of 12, so I'm nearing the finish line. I didn't take a picture because it just looks like a big mess of gray yarn right now and nobody wants to look at that. To be honest, I haven't even removed it entirely from my knitting bag in quite a while so I have no idea what it looks like myself. But it's definitely not pretty, I'm sure of that much.

It's sad to see summer coming to an end, but the bright spot is that summer is followed by knitting season. I intend to wrap up these projects and start on a whole slew of new ones - I've got pretty yarn and fun patterns just waiting for me. It's tempting to push these dull-colored projects aside and start on them. Seriously, I don't know what made me knit grey, dark green and off-white projects all at the same time, but I can't let that happen again!
Posted by 3goodrats at 7:45 PM