The Cellist of Sarajevo

The Cellist of Sarajevo by Steven Galloway (2008) 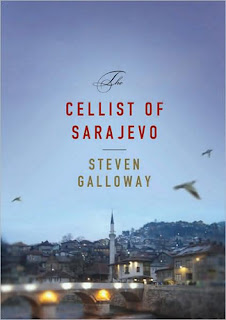 One afternoon in Sarajevo, 22 people were killed by a mortar attack while waiting in line for bread. A cellist who witnessed the attack from his window decided to play every day on that spot for 22 days. Meanwhile, a young father risks his life to walk across town for water. An older man reconnects with a friend while he is on his way to get bread. A young sniper tries to protect the cellist from afar. Their city now barely recognizable, the inhabitants try to reconcile this new terrifying environment with the familiar home they know and love.

The first chapter is told from the viewpoint of the cellist, and the rest alternate between the other three characters. The prose is spare but beautiful. Though most of the story is internal and there is little action or dialogue to propel you, it's easy to fly through this short novel.

Though subtle, there are complex themes and difficult questions, as each character struggles to make choices that could mean life or death. Their decisions are small, mundane, and may be totally inconsequential. As the sniper Arrow observes, "There are no grand moments where a person does or does not perform the act that defines their humanity. There are only moments that appear, briefly, to be this way." But we do see small acts of great significance. Simply walking across an intersection is an incredibly brave act of resistance. Playing a piece of music on a cello is transformative.

I should mention that although this is a work of fiction, it is based on real events. A cellist named Vedran Smailovic played in ruined buildings during the siege of Sarajevo. Although unusual, the story isn't completely unique - and it's exactly the kind of story we refer to when we discuss the importance of the arts. Galloway deftly illustrates how music inspires hope in a city that desperately needs it.
Posted by 3goodrats at 11:51 AM