I came very close to ripping out my Jack-in-the-box Mittens. My mood has been of the ripping-out sort recently, what with the Mottled Rib Sweater fiasco and that nameless sock I started and hadn't even gotten around to telling you about before frogging it completely. The Jack-in-the-box Mitten I started had been languishing in my knitting basket and I decided I needed to face it one way or the other.

Even when I started it, I wasn't crazy about the wrist ribbing pattern. Then as I went on, I realized the mitten isn't knit tightly enough to be as warm as I would like it. I had just about talked myself into trashing the project entirely when I pulled it out and realized that the first mitten was closer to being done than I remembered, so I spent an hour or so just finishing it and starting the second one. 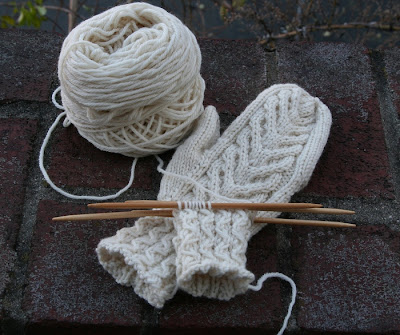 Here's a close-up of the offensive ribbing. 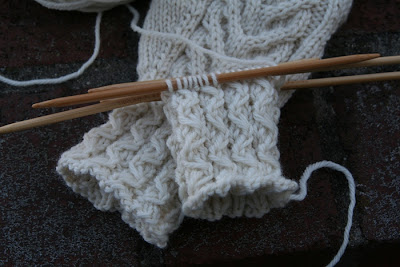 It's a little fussy. I can't explain why I didn't just knit plain ribbing instead of what the pattern called for. Maybe I should make it a goal for 2013 to get out of my lazy mindset and actually modify a pattern rather than knit it as written and then complain about it.

One thing that saved this project for me - in addition to the fact that I was farther along on it than I had realized -is that I quite like the cable pattern. 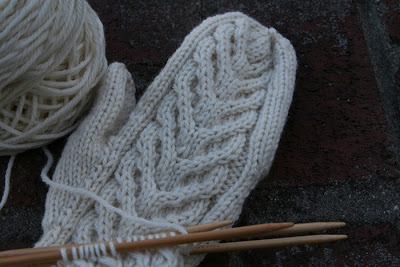 Cables are just so satisfying, aren't they?

If I can get my nose out of a book for two seconds, I may actually finish this before Thanksgiving.
Posted by 3goodrats at 7:51 PM