Above All Things by Tanis Rideout (2013) 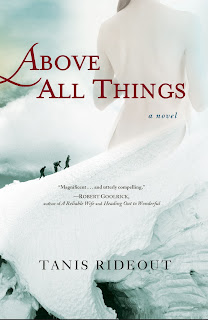 In 1924, George Mallory embarked upon his third attempt to be the first to reach the summit of Mount Everest. His past failures haunting him, he nonetheless pushed on, determined to succeed so he could finally be satisfied and return to his family. Meanwhile, his wife Ruth waited at home with the children, missing George terribly, regretting their argument about his leaving the family once again, and trying to endure his absence. Alternating between their stories, the historical novel followed George through his expedition on Everest, and Ruth through one day at home. The result is a beautifully rendered tale of love and obsession.

First off, this is a gorgeous cover, despite the beheaded lady, and it actually fits the story. But there is much to love inside the book as well. The 1920s are a fascinating period (and very trendy right now), but this is a different aspect of it than we usually experience. While Americans were enjoying jazz, making bathtub gin, and moving to Paris to write novels, George Mallory and his crew were embarking on this decidedly unglamorous and life-threatening quest. Somewhere I heard it described it as The Paris Wife meets Into Thin Air, and I think that's quite apt.

The chapters all had headings with some sort of measurement - for Ruth's chapters it was the time of day and for George's the altitude. The slow, measured pacing captured what each character was going through. Ruth struggled to get through the day, anxious for word from her husband, trying to fill her time to just make it go by so she'd be closer to his return. In the harsh climate of Everest, the thin air and freezing wind hindered every movement. Forced to climb at a slow, plodding pace, the climbers had to take great care since any false move could be their last. In both cases, the characters focused a great deal on their relationship and their pasts, not just the events at hand. George was haunted by his time in the war, being forced to recall some of the most unpleasant parts such as putting on an oxygen mask and being reminded of gas attacks.

I don't know how accurate the author's descriptions of climbing the mountain were, but they felt incredibly real to me. The biting cold, the brisk smell in one's nostrils, the crunch of snow underfoot, the stiffness of one's body after sleeping in a tent in a frigid climate. These scenes were beautifully contrasted with Ruth's experiences of domesticity back in England with the children.

Initially, I hard a difficult time getting into the novel because I simply wasn't in the mood for this sort of book, but Rideout's prose is captivating and the story hard to resist. I became so caught up in it that I read the final 150 pages in one evening, staying up late to finish.

I received this review copy as part of Penguin's First Flights program. Above All Things will be released in February 2013, which is why you probably haven't heard about it yet. But you will.
Posted by 3goodrats at 8:30 AM