We Have Always Lived in the Castle

We Have Always Lived in the Castle by Shirley Jackson (1962) 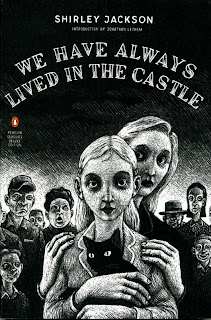 Mary Katherine Blackwood and her sister Constance live alone in their family's house. The rest of the family is dead. Mary Katherine, also called Merricat, narrates the strange story of their lives and how they came to be living by themselves, outcasts shunned by the villagers. It's a dark and strange story, told by a narrator who is obviously a bit off her rocker.

The plot is best revealed in Jackson's skillful way so I won't talk much about it here. The best thing about it is the creepy, gothic atmosphere. Merricat's eccentricity adds a great deal because we know she's not quite right but are dependent upon her to tell the story. She is a girl of ritual and superstition, going to town only on certain days, burying objects in the yard and nailing books to trees to ward off...I'm not even sure what. She also keeps saying she is not allowed to do certain things, but it's unclear why or who is not allowing her to do them.

Mary Katherine and Constance's relationship is strange and co-dependent. Constance never ever lets herself be seen by anyone from the village, although she seems a bit more down-to-earth than Mary Katherine. They are weirdly close, regularly telling each other how much they love each other and how happy they are. It's as though they just want to remain together, isolated from the world, for the rest of their lives. But Constance seems like she'd be happy to rejoin the world if it weren't for her vaguely-threatening sister. Creepy.

Every once in a while I'll read a book and desperately wish that I had written it, and this is one of those books. I can't explain why, except that it just the perfect combination of big old house, family secrets, sinister children, and mental illness. Oh, and a cat. Kind of a creepy cat, now that I think about it. Anyhow, it has all my favorite elements of a good story (lacking only a stern governess, which here would ruin the story.) I also wish I had read this for a book group, because I'd really like to discuss it with someone, particularly those bits that would be spoilers if I wrote about them here.

All around an excellent book. Have you read it? It's only about 150 pages, so it doesn't take long at all, and is absolutely worth it!
Posted by 3goodrats at 8:30 AM

Labels: 2012 end of the world reading challenge, books, fiction, reviews, shirley jackson, we have always lived in the castle