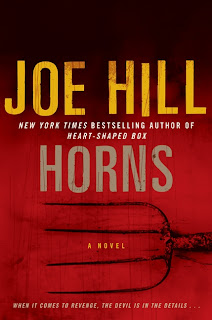 Ignatius Perrish spent the night drunk, doing terrible things. When he wakes up in the morning he finds that his horrible hangover is accompanied by another strange by-product of his evening: a pair of horns growing out of his head. He soon finds the horns come with a strange power. Everyone he speaks to tells him their secret, private urges, whether he wants to hear them or not. As Ig tries to understand what has become of him, the reader learns about his past : his upbringing, how he fell in love with his girlfriend Merrin, and her violent murder, of which he was accused. As Ig falls deeper into the rabbit hole, so the reader falls with him becoming completely caught up in this twisted, tortured tale coming from one of the most talented writers of horror today.

Initially, I found the whole premise of this book a little ridiculous. But I kept hearing about how good it was and I'm so glad I finally folded and picked up a copy. It was strange and weird and a little creepy, and I never was able to predict where it was going.

For those of you unfamiliar with Joe Hill, you should know that his father is Stephen King, and the apple has not fallen far from the tree. Hill has a style all his own, but now and then I was reminded of King, perhaps by the sympathetic way the characters were portrayed - King is a master at character development and apparently that trait has been passed down to the next generation. I wanted the best for Ig, who was a decent guy - a very young guy, even - who really needed something good to happen to him. Although Ignatius was the one sprouting horns, he wasn't the real devil here and I loved every moment of that character's true nature coming to light.

Horns isn't a happy story, nor is it realistic (obviously), but if you're in the mood for some twisted fun you could do much worse. The movie is being filmed now, and stars Daniel Radcliffe as Ig, a casting choice which I think just might be brilliant.

Hill's collection of short stories, 20th Century Ghosts, was fantastic and I liked the first volume of his graphic novel series Locke and Key, though the art style wasn't exactly to my taste. After also enjoying Horns a great deal, I might be hooked. Now I'm hoping to read Hill's previous novel Heart-Shaped Box, and I'll be looking out for the forthcoming NOS4A2.
Posted by 3goodrats at 12:25 PM