A Slender Thread by Katharine Davis (2010) 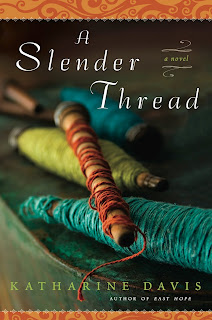 Margot and her older sister Lacey have always been close. From their early summer days at Bow Lake, through Margot's difficult marriage, Lacey has always been the strong older sister who helped Margot and cheered her on. But when Lacey is diagnosed with a form of dementia that will slowly rob her of the ability to use and understand language, the two women and their families must deal with her disease, as the slender threads that bind them together grow more and more taut.

Lacey has twin teenage daughters getting ready for college, and a loving husband named Alex. Margot and Lacey have known Alex since their childhood days at Bow Lake, and early in the book there are hints that Margot may once have had feelings for him. Now, Margot lives with Oliver, who is finding success as an artist. He wants to marry Margot but she is resistant because of her bad first marriage. It was then that she stopped making her own art, but now as her family struggles with Lacey's illness, Margot once again begins painting. Lacey is also an artist, but with fiber - she expresses her creativity through weaving beautiful tapestries.

The first couple of chapters felt a bit stiff and awkward, but I soon started getting into the story. I thought it would be about the disease, but it was mostly about how Lacey and her family dealt with the diagnosis and the ways it changed their lives. There are obvious ways, but also more subtle changes and tension in all of their relationships. We didn't ever get Lacey's perspective; most of the story was from Margot's view, but occasionally we got Oliver or Alex as well. There was a LOT of internal thought and reminiscing, especially Margot's thoughts about their long-ago summers at Bow Lake.

I had just a couple of minor annoyances, like Lacey's stubborn refusal to tell her daughters about her condition - a frequent plot-furthering device - and the way the characters kept putting off important conversations with silly excuses about being tired or whatnot. Also, Margot's insistence on dropping everything and rushing to be with her sister's family every time she thought they needed her, and then realizing she probably didn't need to, over and over again.

But it was a good story that became more engrossing as it went on. I liked how the characters were all so flawed but nobody was a villain. I liked how complicated it all was, going all the way back to Margot and Lacey's childhoods and how it affected them later, plus Margot's early marriage and its devastating consequences.

I also liked how art was so important to many of the characters. Lacey's weaving was something she hid behind but also a way of expressing herself, even more important as she began to lose language. Oliver's art career began taking off in a big way, and he started making some big life decisions because of it. Margot, who had stopped painting after living through a horrible marriage, began to take it up again. It brought home that a devastating diagnosis doesn't stop everything else - everyone affected has other things they think about and care about and focus on more than their own dramas.

This doesn't seem to be a well-know book (indeed, I hadn't heard of it until I received it as a gift) but those who enjoy domestic fiction will appreciate it.
Posted by 3goodrats at 12:42 PM