Where We Belong by Emily Giffin (2012), narrated by Orlagh Cassidy 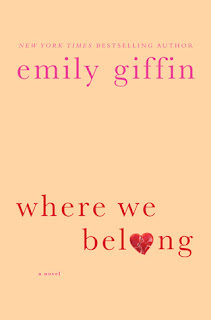 Marian is 36, a successful tv producer in New York, and has an equally successful boyfriend. But despite appearances, not all is perfect in her life. One night, after an especially strained conversation with her boyfriend about their relationship, her doorbell rings. Expecting it to be Peter, Marian is startled to find instead an 18-year-old girl she's never seen before. Except that she has....and now Marian's world is forever changed. I'll leave it at that, so as not to ruin the plot for you.

Chapters alternate between Marian and teenaged Kirby, two very different lives and very different perspectives. The characters were well developed and easy to visualize. Although I sympathized with Marian in the early parts of the book, I unexpectedly began to dislike her more and more as it went on. I have no idea if this is intentional or if I was just feeling especially judgmental. But it didn't matter because I really liked Kirby so much it more than made up for it. (And Marian gained much of my respect back in the end, so it's all good.)

Giffin has delivered another great story and although it was somewhat, but not entirely predictable, it was immensely satisfying. Unlike a lot of chick lit books, there was little romance. All the good stuff was in flashbacks, which didn't lessen the effect at all. But that's mostly not what it was about. It was more about the choices you make and have to live with, how they affect others, and the importance of honesty. I've consistently liked all of Giffin's books (I've read all but one so far); she's not afraid to tackle difficult problems, and she does a great job of capturing all the subtleties of real life. She doesn't tie it all up neatly in a bundle at the end, but still draws each story to a satisfying conclusion and leaves her characters irrevocably changed for the better.

I make a point to listen to Emily Giffin's books on audio if possible. They are just the sort of books I enjoy that way, and this one was no exception. Although there were a few times I thought she slipped into another character's voice a bit, the overall experience was satisfying. And! It turns out I've listened to this narrator before, more than once. I really need to start paying attention to these things. Orlagh Cassidy also narrated Beth Harbison's Thin Rich Pretty, which I KNOW I enjoyed way more than I would have if I had read it in print. Even more surprisingly, she was responsible for the beautiful performance of The Piano Teacher. I would never have guessed, since that voice was so British and classy-like. It also wasn't the sort of book I usually listen to on audio, and I loved it. This makes me feel better about my next audiobook choice, a crime novel which is coincidentally also narrated by Cassidy. She is just everywhere.

Audio or not, if you've liked Giffin's other books - or chick lit at all - then surely you will like Where We Belong. It's one of her best.
Posted by 3goodrats at 8:30 AM