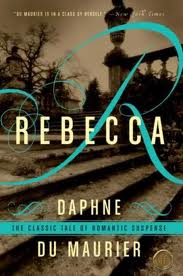 The young, unnamed narrator is working as a companion to an American woman in Monte Carlo when she meets an older widower, Maxim de Winter. They agree to marry almost immediately, and after their honeymoon return to his English estate, Manderley. The new Mrs. de Winter tries to settle in, but is uncomfortable by the continuous comparisons to Maxim's first wife, Rebecca. The housekeeper, Mrs. Danvers, is an especially sinister figure who loved Rebecca a great deal and is less than welcoming to Maxim's new wife. Mrs. de Winter comes to feel that Maxim doesn't love her because she cannot possibly compare to his apparently-perfect first wife. But Manderley holds many secrets, and soon they begin to unravel.

Rebecca is dark, gothic, and beautiful. Du Maurier's descriptions of Manderley in the first chapter are full of foreboding, and the few pages in which she describes the vegetation set up the atmosphere for the whole story. Reading descriptions of estates can positively bore me, but there was action in the way the Manderley vines twisted around other plants, choking them, and in how the menacing trees impeded those trying to come up the drive, the fifty-foot rhododendrons towering over it all like dark sentries. This novel hooked me from the very first page.

The characters, too, are mysterious and shady. Mrs. Danvers is sinister from the start, but with others it can be difficult to know whose side they are on. And the new Mrs. de Winter is in the midst of it all, coming into a household that has been operating in its own way for years, and expected to slip into the role of someone who is dead, but was a completely different person. The previous Mrs. de Winter used to sit at this particular desk in the mornings and write letters with this pen, so the new Mrs. de Winter is expected to do the same. It's so deliciously ominous.

I'd love to read lots of deep meaning into the fact that the narrator is unnamed, but the author's note explains that she just couldn't think of one. And it works perfectly. Somehow it is appropriate that our heroine, who is under-confident and constantly overshadowed by her dead predecessor, has no name of her own. Our heroine, who it's difficult to especially like or dislike because she is so young and unformed, avoids confrontation at all costs and is happy to surrender decision-making to others. But as the story progresses and she learns more about her husband and about the perfect, beautiful Rebecca, she begins to come into her own. This is not the sort of coming-of-age story you are used to.

Although I've been trying to catch up on classics for several years, this one escaped my notice until recently, probably because Du Maurier doesn't have a huge body of work like Dickens or Austen. The short story "The Birds" is the only other work of hers I'd heard of and I didn't realize she was the author until now. What made me want to pick this up was Simon from The Readers who manages to mention it at least once during every podcast and whose blog header includes the cover image. Thank you, Well-Read British Man I've Never Met. Rebecca is just fantastic in many ways, and I'm sorry it's taken me this long to read it for the first time. I suspect it won't be the last.
Posted by 3goodrats at 10:33 AM

The Coolidge will likely be showing the Hitchcock film of this on Valentine's Day.

Oh nice! That sounds like an awesome way to spend Valentine's Day!