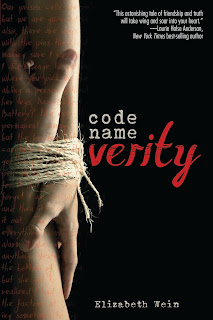 I just posted about this book a few months ago, so I won't go into the plot summary, but having just listened to the audio in preparation for my Not-So-Young Adult book group at work I thought it merited a few more words.

Looking at my previous review I see that I almost put it down at one point which I had completely forgotten since I liked it so much in the end. I think I struggled more this time. The audio wasn't a great choice for me with this particular book, which I should have realized. There were many moments when my mind drifted and I suddenly realized I had no idea what was going on. (I'm hoping to skim through the book a bit before the discussion.)

However, none of this was the fault of the production, which was excellent. There were two narrators, both of whom did an excellent job reading. I especially enjoyed the first one, who had the most charming Scottish accent ever. Partway through the book the narrators switched because a different character tells that part of the story. It was a little hard to adjust to a new narrator but once I did, I really liked her as well.

One of my favorite little bits of the story was something I had forgotten from my initial reading. Verity's part of the story is the confession she's writing for the Nazis who have captured her, and paper is quite hard to come by so she writes on all sorts of odd scraps. At one point she must write on some pages of flute music. She explains that she is writing lightly, in pencil, between the notes in case somebody wants to play it someday. Here is a young woman who is sure she's going to be killed when she finishes her story - and she's almost done - yet she's thinking about someone later possibly wanting to use the sheet music on which she is writing. How heart-breakingly considerate!

Even upon second reading, I found this story fresh and original and was again touched by the deep and loyal friendship between the two young women brought together in wartime. This is a great crossover title that I think would have just as much (if not more) appeal to adults as to teens. It's a must for anyone who enjoys WWII-era fiction.
Posted by 3goodrats at 10:00 AM