A Constellation of Vital Phenomena

A Constellation of Vital Phenomena by Anthony Marra (2013) 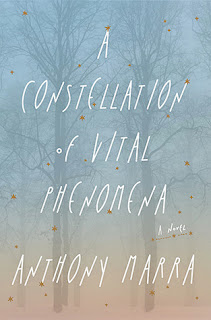 In war-torn Chechnya an 8-year-old girl named Havaa hides while her father is taken away. Her neighbor Akhmed, knowing that she is in danger too, takes her to a nearby hospital in hopes that the sole remaining doctor will take her in. The doctor, Sonja Rabina, is suffering the loss of her sister Natasha and remains emotionally distant even as she works to save the lives of the patients coming through the doors. The stories of Akhmed, Sonja, and Havaa are revealed over the five days of the novel as we learn all of the ways in which their lives are intertwined.

There is so much more to this book than I can summarize here. In addition to the three main characters are several secondary characters, who all have their own stories. The novel is about their connections, separations, and disappearances, not to mention the guilt and responsibility some of the characters carry. It is reminiscent of Stalinist Russia or Nazi Germany in its culture of paranoia, torture, and informing on neighbors to save oneself. And when you delve into each character's story, you just can't blame them for the actions they've taken because each person's situation is so desperate and they all feel so powerless.

It is hard enough when someone you care about dies, but in these pages are so many situations in which a family member or friend disappears leaving their loved ones to wonder, possibly for the rest of their lives, what happened to them. It happened over and over again and yet, they all had to keep on going. I don't think I could stand the not knowing, but I guess maybe everyone thinks that before it actually happens and you have no choice but to go on.

What I loved though, is that the reader knows. We are frequently told how the lives of various characters will end up, and sometimes even get a little glimpse of the future of even the most minor characters. It makes it all seem more real. Like, you know how the people in your life are minor characters in your life and it's a whole paradigm shift when you realize they are the stars in their own lives and you are a minor character to them? It's a little like that throughout this whole book.

The writing is wonderful, with vivid descriptions: "A smock of dark evergreens wrapped around the nearest mountain." Other passages were striking for their insight or perspective, and I read them over again: "Khassan was studying the sheet of paper in his hand, where in the fifth sentence of the second paragraph, in the gap of a missing comma, he found the sorrow of his life."

I'll admit that at times I would feel, briefly, like the book was suddenly too long and lacked forward momentum. But then suddenly, with just a few words, I'd again get caught up in the sadness and complexity of the story and be riveted for the next hour. It's not a happy story, but it's a rich and complicated one, beautifully written, that will leave you with a lot to think about.
Posted by 3goodrats at 11:06 AM