Bridget Jones: Mad About the Boy

Bridget Jones: Mad About the Boy by Helen Fielding (2013), narrated by Samantha Bond 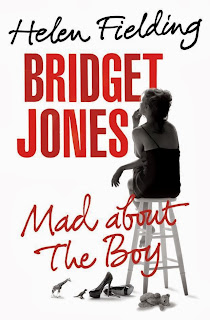 It's been many years since we've seen Bridget Jones, and a hell of a lot has changed. First off - and I'm sure you've seen all the hysterical book review headlines about this - Mark Darcy is dead. Dead! Bridget is a 51-year-old widow with two little kids and she's finally ready to begin dating again. She meets a 30-year-old guy named Roxster on Twitter and embarks on a relationship, while balancing all the responsibilities of a single mother. Hilarity ensues.

Let's just talk about this Mark Darcy situation first and get it out of the way. We spent two books trying to get Bridget and Mark together, and it's kind of a shame we didn't get to experience their relationship. But that wouldn't be a very interesting book, would it? One reviewer at least is convinced it wasn't necessary to kill Mark, arguing that a marriage has enough fodder to sustain a narrative arc. While I agree with that, I don't think that sort of story is Helen Fielding's style. It certainly wouldn't be the sort of Bridget we all know and love. She needs to be awkwardly dating and mucking shit up all the time.

Enter Twitter. Some of the funniest scenes in this book are from Bridget's early experiences using Twitter and being obsessed about her lack of followers. Ultimately though, she gains some followers, including the young Roxster. After some online flirting they decide to meet in real life, and begin dating. There's a lot more explicit sex in this book than in the first two Bridget Jones novels, and I wasn't crazy about that, but it wasn't enough to really detract from the story.

I think I read in a review somewhere that Bridget hasn't grown up since the last novel, but I disagree. She is pretty similar in terms of dating - and why not? She's spent all the time since we last saw her married. How would she have gotten better at that? In that time she has also become a mother, and a good one. Her relationship with her kids was really quite touching, and though she had moments of frantic disorganization and the kids sometimes acted up, I think that's pretty realistic. She's certainly learned to cook since the last book. Back then preparing a meal was fraught with unreasonable expectations, disorganization, and clumsiness. These days she has kids to feed and is pretty no-nonsense about getting a meal on the table.

Bridget had two romances during the course of the novel, and unfortunately I found one of them very unconvincing. It felt rushed to me, and I didn't feel like I really knew this guy at all. I'm sure he's a great person, but I didn't get the chance to find that out for myself. To me, he was a usurper who didn't earn the right to take Mark's place. So that left me feeling a bit unsatisfied.

I was very disappointed that the narrator wasn't Barbara Rosenblat. I've listened to the first two Bridget Jones books countless times, and it's Rosenblat's narration that really makes the experience for me. I'm sure Samantha Bond does a good job but it's so hard for me to consider her performance objectively because ultimately she fails at being Barbara Rosenblat. This of course is an unfair judgement and is my problem, not Samantha Bond's problem.

All in all, I liked this new (and final?) installment in the Bridget Jones series. Given the premise of the book, it simply can't be as lighthearted as the previous two novels. There are many moments in which Bridget gives in to sadness over Mark, and I couldn't help feeling sad too. Nobody should be widowed like that, at such a (relatively) young age. I thought Fielding did a good job though of balancing the sadness and the humor, and I feel comforted to know that Bridget is still doing ok. Obviously it wasn't as fun as the first two books but I still liked it, and I liked this new more mature and capable Bridget who can withstand tragedy and still manage to enjoy herself.
Posted by 3goodrats at 8:05 AM

Nice review. Makes me curious enough to want to read the series.