In my excitement at finishing two sweaters in such a short period of time I wanted to cast on for something new immediately. Now that my beloved Windsor Button is gone and purchasing yarn isn't quite so instant, this means working with what I have on hand already. Ages ago I queued the Geodesic Cardigan from Knitscene, bought the yarn, and put it with the magazine into a ziplock bag to await casting on. A year or so later, the time came. One evening at around 8pm, after a relaxing glass of wine, I grabbed my swift and ball winder and pulled out the hanks of yarn to wind them.

Mind you, the state of my house right now is such that I can't wind yarn on my sewing table where I usually do it. My ball winder is kind of like this, which means it needs to clamp onto a table, a very thin table. I forced it onto the edge of my kitchen table, and optimistically put the first hank of yarn on the swift. Soon, this is what I had. 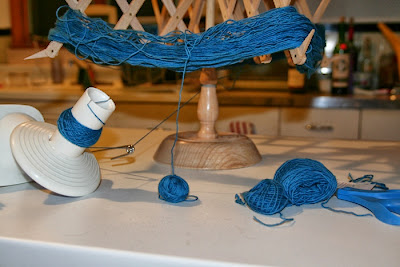 Don't be distracted by the brilliant color. Look more closely.

First, the stupid ball winder came off the edge of the table, which really was too thick. I had to hold it awkwardly in one hand while turning the handle with the other. Usually, this would work ok, and I'd just have to occasionally stop winding to straighten out the yarn or remove it from the swift arm where it is caught. But this isn't usual yarn. Malabrigo Lace is clearly the work of Satan and was wound into this hank by his evil minions.

There were eight ends, which was extremely confusing. They weren't even knots, as you sometimes find, just ends. This made it a little easier though, when it came so impossibly tangled that I couldn't undo it, hence the ball winder sitting uselessly aside with its partial ball while I began winding by hand with another end I found. I couldn't even take the partial ball off the ball winder and continue with it because the yarn feeds through that small eye and I'd have to undo the whole ball to feed it back through, which would be pointless.

Occasionally, a ball of yarn will be a tad tangled. You put the hank on the swift and it seems one piece is looped around strangely, so you need to make a minor and obvious adjustment. This one, though, defied all explanation. As I began winding by hand, I regularly had to feed the whole ball through a weird tangle in order to continue. Sometimes the yarn inexplicably looped back and started coming off in the opposite direction.

At 10:30pm - two and a half hours after I started - I finally finished up the fourth ball (and there should never be a fourth ball) of the hank, bits of bright blue lint coating my kitchen table, and me mad with exhaustion. I couldn't allow myself to even think about the second hank.

A few days later I was recovered enough from my trauma to tackle the second hank. When I put it on the swift, I examined it thoroughly. It turns out that a couple of feet of one end was woven in and around the the rest of the yarn, guaranteeing misery if you had the misfortune of beginning with the other end. Luckily, the second hank went much more smoothly and resulted only in one ball.

I felt rather betrayed by this yarn after my positive experience with the Whisper Cardigan. Malabrigo Lace, you are a fickle bitch and cannot be trusted.
Posted by 3goodrats at 9:00 AM

I hope your initial struggle with the yarn means smooth sailing during the knitting portion. This pattern has been in my queue since it came out. I look forward to reading your notes on the process.

It's going pretty well so far, but I'm only about an inch and a half in.