After I began the Geodesic Cardigan with the Yarn Spawned From the First Circle of Hell, I realize that all three of my current projects were almost exactly the same color. Clearly one of them needed to be finished so I could rectify this situation.

These are the Sunshine Socks, from Cookie A.'s Sock Innovation. 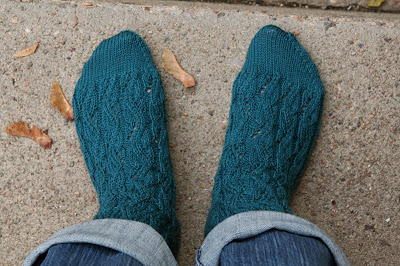 They're a bit loose in the leg, but not as bad as I thought they'd be. They call for a size 1.5 needle which should have tipped me off, but the number of cast on stitches was fairly low. Then in the first pattern row there are some increases, but by then I had forgotten that I was using a largeish needle. But anyhow, I think they're fine.

You may remember that I realized halfway through one leg that there's an error in the chart, and decided to just keep going as I had started. Well, after turning the heel I decided to heed the errata and knit the rest of that sock and the next one the correct way because it does actually look better. 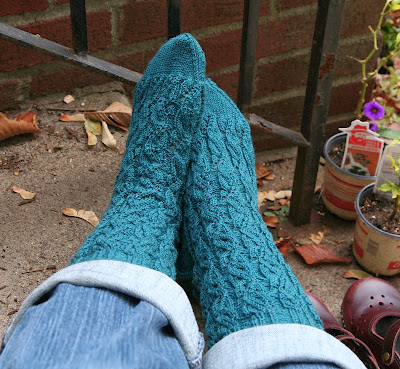 I'm pretty sure the one on the right is the error-ridden one, but you have to look closely to tell (well, especially with this picture. I wasn't thinking about comparing them when I was taking it.) (Also, the color is more accurate in the first photo - it's pretty teal.)

I expect that these will need to be darned about 25 times in the next couple of years before I finally shove them in the trash in a fit of rage. I've used this yarn before and there's no nylon in it so I should have known better than to use it for socks. My plan was actually to make something else with it but I could never decide on what, so now it's socks.

Immediately upon finishing these I cast on for another pair of socks. So now I have two projects that are in the teal family and one in a different shade of blue. I need to find something green or orange to knit...
Posted by 3goodrats at 2:05 PM