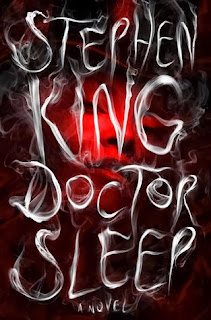 The little boy from The Shining is all grown up, but the memories of that one winter at the Overlook Hotel aren't far away. Dan Torrance has turned into an alcoholic like his father and has hit rock bottom. As he starts on the road to recovery, he secures a job at a hospice where his special talents are useful helping the residents pass out of this world. Meanwhile, a group of older folks called the True Knot travel around in Winnebagos seeking out kids with the shining; torturing and killing these kids releases steam upon which the True Knot feeds, but they are growing weaker. However, they soon learn about a girl with an especially powerful gift, maybe even stronger than that of Danny Torrance himself, and decide to go after her next. They don't know what they're getting themselves into.

In his author's note, King says that no sequel is as good as the original and that he's not the same person he was when he wrote The Shining. Maybe he doesn't think it lives up to the first book, but I think it's just a different book entirely. This isn't The Shining; it's another book starring Dan Torrance a couple of decades later and although all the history is there, there's another whole cast of characters and a fresh new plot, not to mention new ways in which the shining powers manifest.

I didn't re-read The Shining before starting this so the details I remember about it really come from Stanley Kubrick's movie, which I've watched several times since reading the book. I know the movie departs from Stephen King's version (and King apparently doesn't like it) but I don't think I missed anything by not having those details in my recent memory. In fact, this novel could probably stand on its own.

I liked seeing how Dan Torrance's life progressed, how he was both trapped and freed by his past. He would make bad decisions and then up and move to another town where he quickly got himself into trouble, starting the cycle again. It was gratifying when he finally began to pull himself together, and meeting Abra - a kid with whom he could strongly identify - helped a lot. We even find out interesting new information about Dan Torrance's family.

The other characters were great too. Abra made a formidable protagonist, her combination of strength and anger a match for any villain. (In an early scene, she predicted 9/11 as an infant. It kind of gave me the chills.) It would have been easy to dislike Rose the Hat even without her supernatural aspects, but with them she was not only cruel, but frightening. Even supporting members of the cast were well-developed enough to feel like people we've met before, a particular talent of King.

I'm not sure if Doctor Sleep was as scary as The Shining - it's been too long since I read it, and I was just a teenager then - but it's definitely dark and creepy. Mostly, it's a great story with characters I liked reading about, and it kept me very interested for its entire 530 pages.
Posted by 3goodrats at 7:49 PM