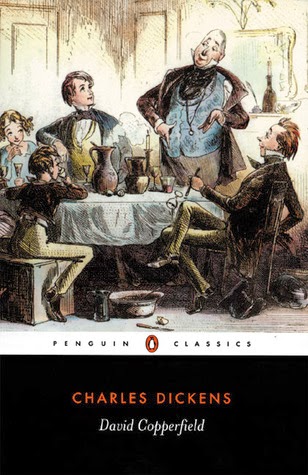 I have just spent what I'm pretty sure is the longest two and a half weeks of my life reading David Copperfield. My edition was over 1000 pages, but even so I can't explain why it took me so long to read it. It was really tough to get through, but now that it's behind me I can look back somewhat fondly on Copperfield's life and the people in it.

The story begins with David's early life, which I can barely remember now because I read that part so long ago. He was orphaned fairly young and associated with a series of colorful characters as he grew up. As with any good Dickensian character, he was misunderstood and mistreated. The novel only has a plot insofar as any of our lives has a plot, and I think that's part of the reason it was so difficult to read. I love Dickens, but my god that book meandered.

A couple of my favorite characters were Clara Peggotty (known simply as Peggotty) and Betsey Trotwood. Peggotty was a servant from David's earliest years who became a mother figure to him after his own mother died, and he always remained fond of her. After she married, David was left in the care of his stepfather, Murdstone, and ended up working at his company until he became fed up and left to find his aunt Betsey. David's aunt hadn't seen him since the night he was born, when she became indignant that he was male and and could not be her namesake. When he finds her, she is standoffish at first, but their relationship developed into one of mutual affection. Aunt Betsey frequently mourns the loss of his sister, Betsey Trotwood, and compares David to her. She even begins referring to him at Trotwood, a nickname he keeps throughout his life.

Then there were the horrible, unappealing characters. As a young man, David fell in love with Dora Spenlow, a simpering idiot who he eventually married. She asked him to call her his "child-wife" which I think is a bit twisted, but appropriate, as she is just as useless as a child when it came to household matters. She accused David of being cruel to her when he suggested that, for example, perhaps they shouldn't allow their servants to rob them blind. The true villain of the novel though is Uriah Heep, a manipulative and sly man who constantly professed to be "umble" as he came from little means, but insinuated himself into business, stealing money and causing others (including Betsey Trotwood) financial ruin for years  before finally being confronted. The description of Heep's strange mannerisms, such as his constant writhing, added to his deviousness and made him easy to picture, and very memorable.

Those are just a few of the major characters, which were so numerous that I had difficulty remembering who some of them were when they left and reappeared much later. Many weren't very well developed when I first met them which made it even more difficult to remember them later, such as David's school friend Traddles who he becomes close to again as an adult. (And I am totally naming my next pet Traddles, which I think would be a fantastic name for any animal.)

One of the more interesting parts of the plot to me was when a few of the characters decided to emigrate to Australia. The Micawbers, a family always perilously close to financial ruin, and Emily, who caused a scandal by leaving her fiance and running off with another man, were among a small group who did not have a bright future awaiting them in England. But in Australia one could leave the past behind and start fresh, and many opportunities awaited those who were willing to give up everything and go. Now this was an intriguing story I wish Dickens had written.

Having complained my entire way through this lengthy and slow-moving tome, I feel a little strange saying that it was pretty good. I'm glad I know the story and the characters now, plus it's always good to have read a classic that is so frequently referenced. The other Dickens book I've been wanting to read is Bleak House, but now I don't know if I have it in me to read another of his super long novels. Next time I have a hankering for Dickens, I may re-read Great Expectations, which remains my favorite.
Posted by 3goodrats at 9:46 AM

I tried "Bleak House" a few years ago and gave up after 150 pages; recommended only if you're utterly fascinated by the intricacies of the 19th-century British legal system. Perhaps I'll give "Great Expectations" a try someday (haven't read any Dickens since "A Tale of Two Cities" at age 13).

A Tale of Two Cities wasn't bad, but I prefer both Great Expectations and Oliver Twist. I think Great Expectations is also one of his shortest novels, so that's a plus :) Thanks for that warning about Bleak House - kind of sounds like torture!