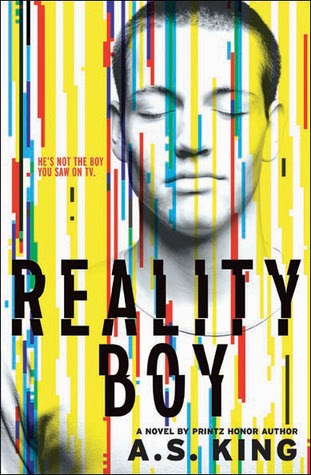 When Gerald Faust was five years old he became a reality tv star. His family's problems (or some version of them) were broadcast to the world and mostly revolved around Gerald's own behavioral issues which earned him the nickname "the Crapper." He's been angry ever since. All he wants is to be free of his past and not wind up in jail.

At 17, Gerald's family situation has not improved. His older sister Tasha lives in the basement with her boyfriend and they do not care that everyone in the house can hear them having very loud sex multiple times a day. The noise drives Gerald crazy, as does the fact that his parents just pretend it isn't happening. They just all go their separate ways when the rhythmic pounding echoes from the basement, his mother turning on the blender to make a smoothie, his father offering to fix Gerald a drink. (Yes, with alcohol.) This is pretty much the same way they deal with all their problems.

Though he is smart, Gerald is in special ed at school, and it is the other students in his class who he really considers his family. They don't judge him or call him the Crapper. This closeness with the special ed kids shows what a good person Gerald really is. He's so nice to all of them because he understands what it's like to be seen as different. He could have tried to align himself with more popular kids to distance himself from his oddball past, but he didn't. He could have turned his anger against people who are outcasts, but instead he uses his experiences to be more compassionate about others. Thus, I love Gerald. I want good things for him. I want him to successfully finish high school, attend the college of his choice, and get a job working with troubled youth who will be inspired by his example. I am convinced that these things will happen.

I'll admit I really, really dislike reality tv though I've seen a few episodes here and there. This story raises some interesting questions about reality shows and how the characters (actors? participants?) and the audience are manipulated. Yes, this family had big problems. Yes, their 5-year-old kid pooped in inappropriate places. But no, his behavior wasn't actually the problem; his behavior was in response to a whole host of problems, most of which were completely omitted or glossed over from the show. The result? Everyone thinks they know everything about Gerald, but nobody really does.

But people in his life weren't all bad. In addition to the special ed kids at school, Gerald had his sister Lisi on his side and also a love interest he first knows as Register #1 girl at his job. And then there's Hockey Lady, who recognized Gerald from the show and immediately gave him a big sympathetic hug and words of encouragement. Gerald also has a rich fantasy life in which he eats ice cream all the time and hangs out with Disney characters. A little weird maybe, but it helps him cope.

There's so much more I want to say about Gerald and his family and the ways in which they are screwed up and why I think he's a better person than any of them, but really you should just read it for yourself. There aren't enough YA books with male protagonists to begin with, but this one also stands out because Gerald has such a unique and well-developed voice. Throw in the anger management issues and reality tv plot and Reality Boy is a winner all around. A.S. King continues to prove herself one of the best YA authors out there - I already can't wait for her next book!