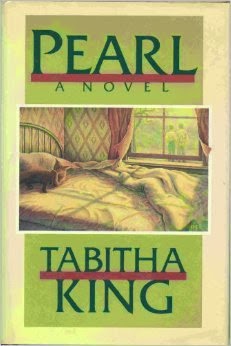 Pearl Dickenson inherits a piece of property in Nodd's Ridge, Maine from a great-uncle she has never met. Rather than selling it off, she moves there to settle down. She is biracial and beautiful and her novelty turns heads. She takes over a diner from a local and makes it her own, putting most of her energy into running the business. When she's not at work she is dividing her time between two men, becoming ever more deeply embroiled in her complicated love triangle.

Pearl was making a pretty big mess of her life and seemed completely unconcerned about deceiving two decent men. This is a small town; the heartbreak she may cause won't just go away. Although I never completely sympathized with her, I became quite drawn into her situation and very concerned about which guy she would end up with (if, indeed, she ended up with either after she two-timed them both.) David, a poet with a tragic past, is romantic and passionate. In fact, his passions are so strong they sometimes border on violence, enough to make me a bit uncomfortable with a couple of the sex scenes. Still, he is emotionally fragile and basically a decent person who was just screwed up because of his experiences. Pearl's other flame is Reuben, a single father of two, one of whom was Pearl's employee. Karen is a high school dropout with an older boyfriend and a hot body she likes to show off - basically every father's nightmare. Reuben feels helpless to control Karen, but desperate to make sure his ex-wife (and her preacher husband) don't get custody. He hadn't dated since his marriage and doesn't have especially high self-esteem, but was definitely the front-runner in this race in terms of a potentially stable long-term relationship.

The third person narration stayed fairly distant, and I quickly became frustrated not knowing what was going on in Pearl's head. As she conducted her affairs with both Reuben and David it seems like she had to know what a horrible situation she was creating and that she would eventually be found out. But I only know what she said and did, and had few clues to her motivations. It was also hard to understand why she gave up her life to move to this town and start over, and I didn't feel like it was ever adequately explained. Nor the reason why she got a Master's in Library Science but wanted to own a diner. Her career transition remained mysterious. She wasn't the most convincing out-of-stater either, seamlessly transitioning to this town without even the tiniest complaint of the weather, the distance to nearby towns, or even the most mundane observation to illustrate the fact that she was from someplace else. I grew up in Maine and have met a lot of people who came from other states and believe me, the transition would be noticeable.

I'm conflicted about the way race is treated in the novel. When it came up, as it did when certain characters hurled epithets at Pearl, it was glossed over easily. She would laugh them off and explain that she didn't have time to fret over how other people thought. On the one hand, I sort of gave her props for not bogging herself down in other people's bigotry issues. On the other hand though, what the hell? You are moving to a place where everybody else is white and some people are giving you shit for not being white and that's all you have to say about it? Which brings me to the very interesting subject of authors writing about characters of a different race. This could be an entire blog post (and perhaps it will be.)  In short, I think that part of writing fiction is creating characters who are not you - that is why it's fiction - but there is still something a little discomfiting about white authors creating main characters who are not white. I kind of wonder why King made Pearl biracial at all, because it didn't add a whole lot to the story.

On a lighter note, I found it pretty hilarious that there were references to a character from The Shining, the classic horror novel by Tabitha King's husband Stephen. Pearl learned to cook from one Dick Halloran who worked at her stepfather's diner in the Florida Keys in the winter, but in summer cooked at the infamous Overlook Hotel. (There was also a passing reference to Cujo, but it was the 80s and any mention of dogs at that time conjured up images of that particular rabid canine.)

This sounds fairly complainy, but honestly I enjoyed reading this novel. Pearl isn't the first woman to appear outwardly successful while mucking up her personal life and overall I found whole story quite satisfying. It took me a while to get into, but then I became immersed in the lives of everyone in this small town, and it felt a bit like reading Richard Russo or Stewart O'Nan. Small town stories have great appeal, and I especially like stories about women moving somewhere and making new lives for themselves, fixing up a house or starting a business. Overall a satisfying read.
Posted by 3goodrats at 9:21 AM